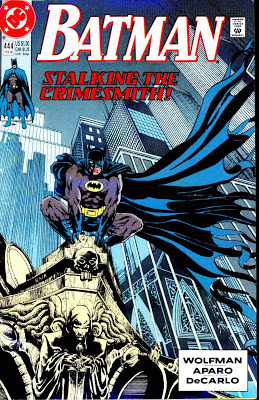 So last night I decided to go to sleep fairly early as everyone else here had already faded for the evening. The problem was that the Cincinnati Reds had fireworks after last night's game and they rattled the house for about half an hour even though they were coming from 19 blocks and a bridge away! While I was lying there, though, trying to ignore them, I realized I had neglected to put the laundry that I would need today in the dryer so I got up and went down into the basement to do so. When I came back up, I decided I'd read a few comics until the booms stopped. Randomly I grabbed a BATMAN comic--issue 444 to be exact. Before reading it, I flipped through it and my eyes landed on the letters page only to find...ME! The problem is that I don't remember writing this. At all! Not. One. Bit. It would have been published in late 1989 when I was 30 years old. In my mind, the last letters I wrote to comic books were in 1973! Still, it "reads" like my writing, touches on themes I have written on since and uses the word "fascinating," a word I know I use too much even now! I used to know another Steven Thompson here in town but he didn't read comics. I'm pretty sure this IS me! I just never realized it had been published and thus put it out of my mind that I had even written it! Weird.

Posted by Booksteve at 6:46 AM