Livin' the Life of Riley in Cincinnati-1949 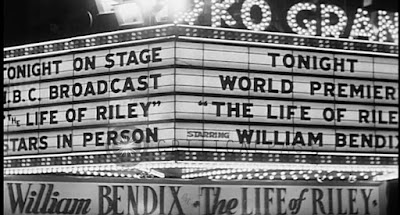 I first discovered the old time radio series, THE LIFE OF RILEY around 1980 when reruns began running as part of a growing selection of radio comedies and dramas on Cincinnati's WVXU-FM.

It's a simple premise for a sitcom. Chester A. Riley is a stereotypical lovable lug married to a nice, long-suffering wife with whom he is raising two children, teenage Babs and the slightly younger Junior. (Years later, I would play Junior in a radio re-creation of one of the original scripts.) In a slightly different form, the series had originally been developed by Irving Brecher and agent Gummo Marx as a vehicle for Groucho but that fell through for various reasons. Not willing to abandon it completely, Brecher spotted tough guy character actor William Bendix in a film and retooled his concept, moving his sitcom family to Brooklyn. 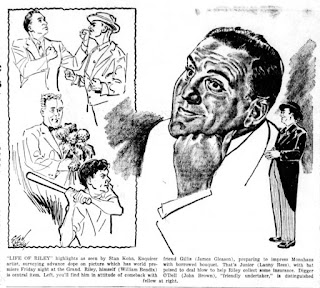 Although not known for his comedy, Bendix made the role his own and went on to define the stereotype blue collar husband that would become a sitcom staple right up to today. THE LIFE OF RILEY--its title coming from an old expression-- was an on-air hit running from 1944-1951, with TWO TV versions (a whole 'nother story there) also, the Bendix version lasting until until 1958.

Perhaps even more endearing than Bendix himself was the later blacklisted actor John Brown, also a regular. Although born in England, Brown was ideally cast as Riley's goofy Brooklyn neighbor Gillis whose advice would invariably get one or both of them in trouble. But Brown really stole the show by doing double duty as "Digger" O'Dell, "The Friendly Undertaker," a breakout character who would generally pop in for a quick one on one scene with Chester, dotted with macabre double entendres and always ending with his tagline, "I'd better be shoveling off."

Along the way--in March of 1949 to be precise--came THE LIFE OF RILEY, a full-length motion picture from Universal-International. The TCM movie page on the film says, "Although Hollywood Reporter announced in January and February 1949 that the film would have its premiere in March 1949 in Cincinnati, no definite information about the premiere was found."

Well let me tell you, they simply didn't look for any because I found it. In March of 1949, THE LIFE OF RILEY had its World Premiere in Cincinnati, Ohio at the RKO Grand Theatre on Vine Street, the exact same theater where, 24 years later, I would see ENTER THE DRAGON starring Bruce Lee, followed by a score of other chop-socky flicks of the '70s.

But in '49, it really WAS a grand theater. Cincinnati was chosen for the old-style Hollywood premiere because Proctor and Gamble, at the time sponsoring the radio series with Prell was (and is) based here in downtown Cincinnati. 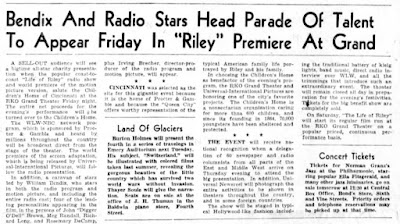 The radio cast (Bendix, Paula Winslowe, John Brown, etc), along with some of the film's co-stars (including Richard Long, later known for THE BIG VALLEY and NANNY & THE PROFESSOR), all traveled to the Queen City, which rolled out the red carpet. The event was used to raise money for a local children's home. Along with the showing of the movie, the huge crowd also was treated to the series' first live remote radio broadcast, the meta script of which dealt with the Rileys coming to Cincinnati specifically to see the movie premiere! There were lots of references to real people both behind the scenes of the show and from Southern Ohio.

The previous week, another radio show, the game show TRUTH OR CONSEQUENCES, chose a family named Riley and THEY actually WERE sent to Cincy for the premiere! 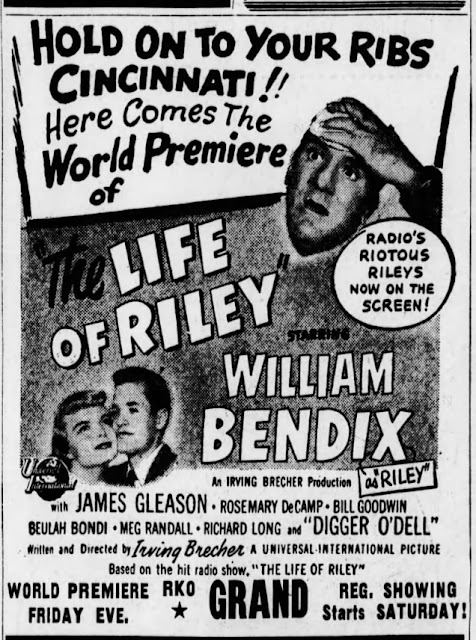 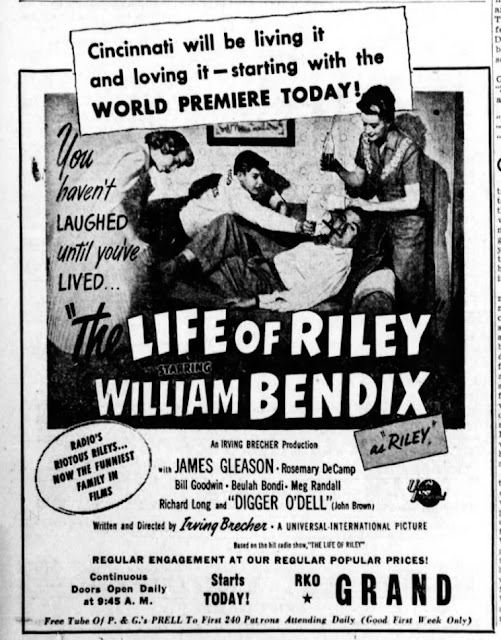 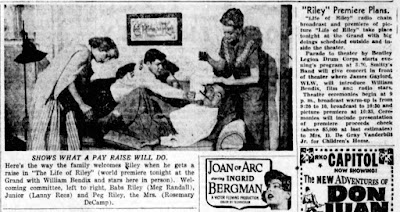 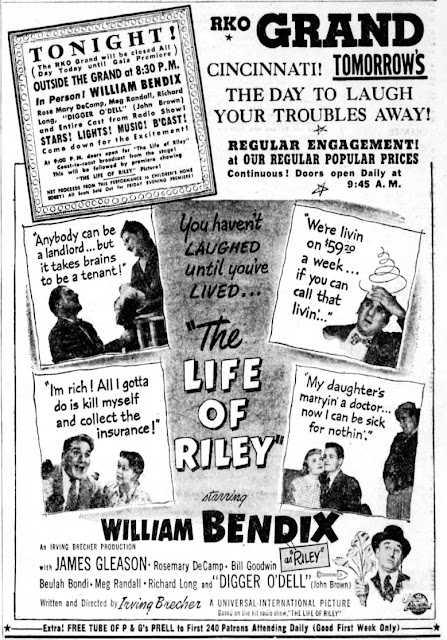 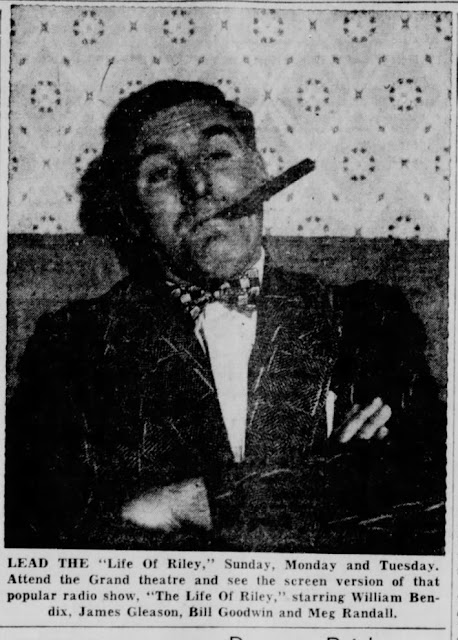 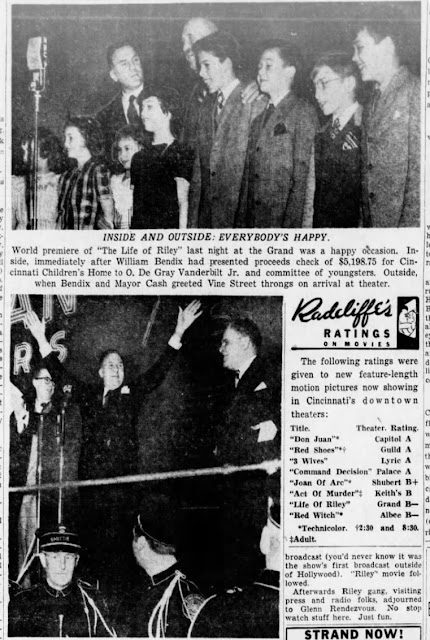 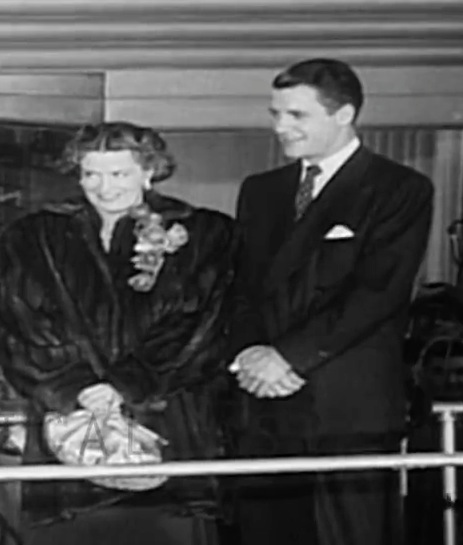 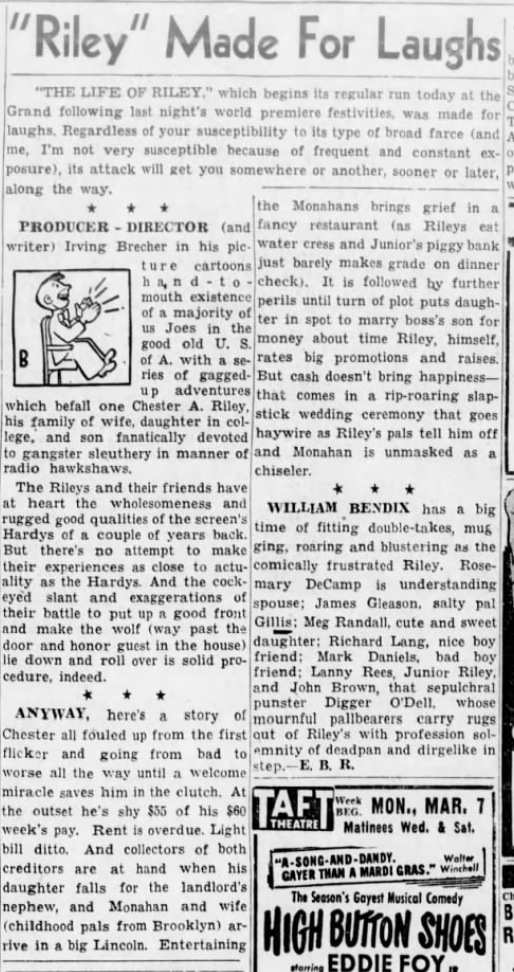 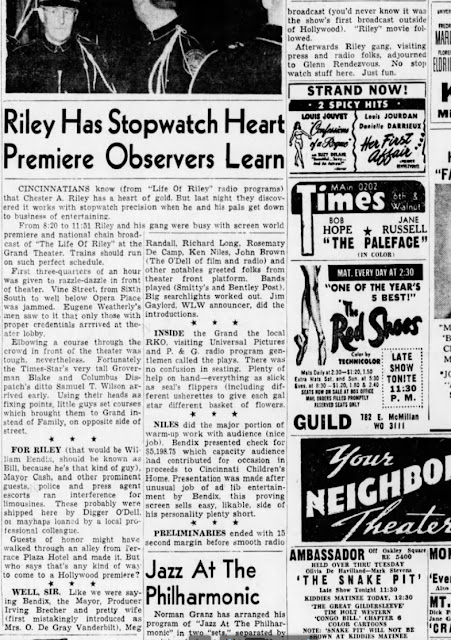 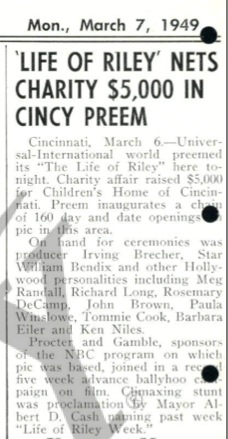 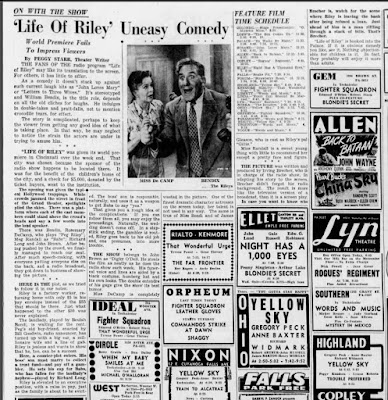 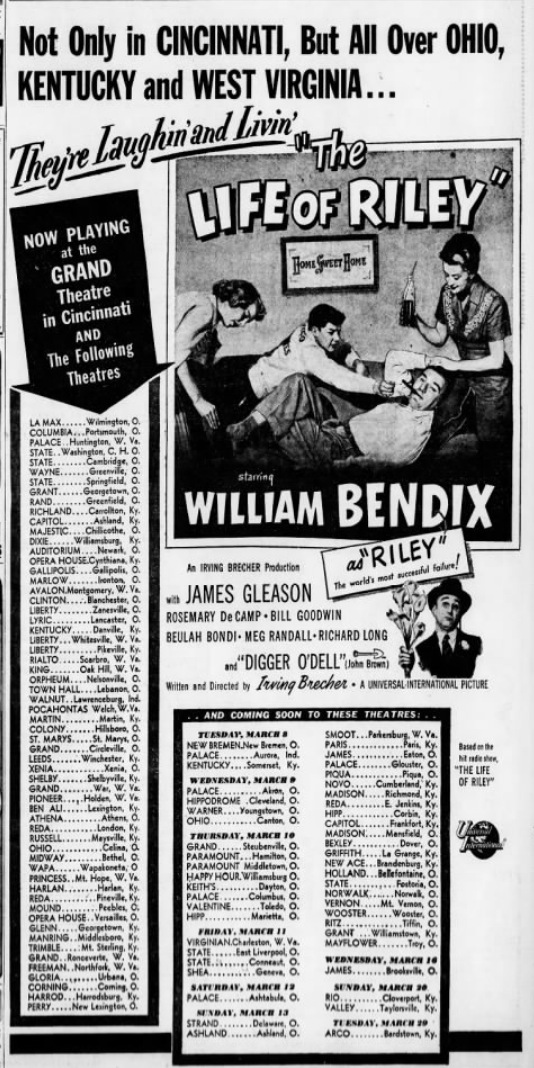 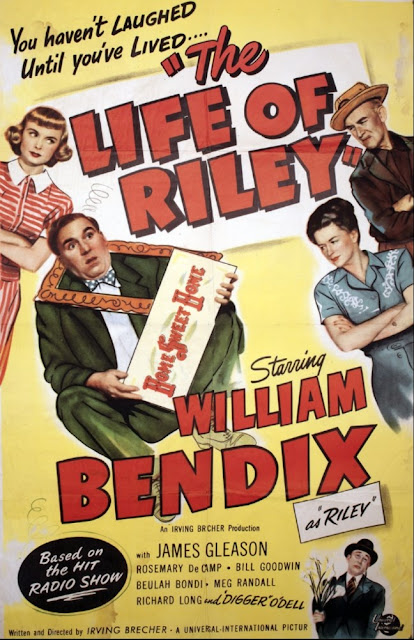 Here you can listen to the episode that was broadcast on March 4, 1949, from Cincinnati, Ohio's RKO Grand Theatre.

And here is some silent news footage of the actual event.


Seriously. TCM, I love ya, but you really didn't try on this one. Please correct.

In an odd footnote, WMKV--successor to WVXU in all the good ways--continues to run THE LIFE OF RILEY every Monday morning. I listened to it yesterday in the car. The reruns have been playing for an almost uninterrupted 34 years now I think!

Oh, and by the way, the movie itself isn't very good at all. Stick with the radio or TV versions, many of which can be found in various places online.
Posted by Booksteve at 5:41 PM