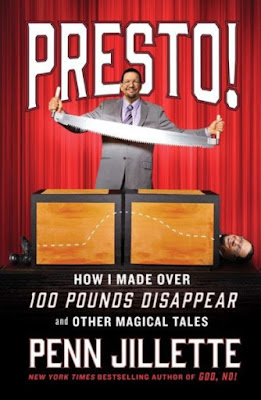 PRESTO! is subtitled "How I Made Over 100 Pounds Disappear and Other Magical Tales" and is by the talking half of Penn and Teller, Penn Jillette.

Let me say right up front that I don't much care for Penn Jillette. I have a number of mutual friends with him on Facebook and I have seen him over and over act like a major jerk in recent years. That said, I admire a lot of what he says and I certain;y have always enjoyed Penn and Teller. Thus I didn't really know how to approach this book.

Overall, I liked it. With plenty of asides, mostly funny, it's essentially the story of how he lost weight under the sway of a kind of guru figure and a diet that would certainly seem to be unhealthy at best.Penn even says he's not recommending it for others, just telling how it worked for him.

I got a bit of a Brian Wilson/Eugene Landy vibe at times which gave the whole story a weird feeling as we know how that eventually turned out. That said, there were enough enjoyable bits that if you like Penn and/or Penn and Teller, I'd recommend it! 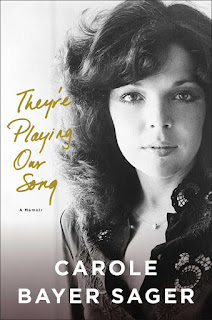 I'm not sure I can say the same for award-winning songwriter Carole Bayer Sager's autobiography. I always thought she was absolutely beautiful but knew virtually nothing about her life going in to this book.

There are the usual celebrity anecdotes, in some of which I believe she outs other celebs for drug use. Those stories about her friends and lovers are the most interesting parts. Carole herself comes across to me as a somewhat vacuous woman with feelings of entitlement and a history of bad choices and depression. While the book definitely humanizes its subject, it fails to make her particularly likable. 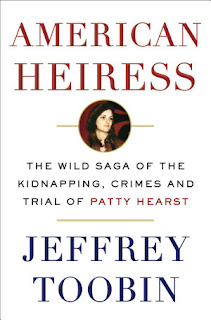 The best of these three would be AMERICAN HEIRESS, veteran crime reporter Jeffrey Toobin's detailed examination of the mid-seventies kidnapping and crimes of Patty Hearst. The story itself is fascinating. Young heiress is kidnapped, then ends up joining her revolutionary, terrorist kidnappers--or did she? The author gathers all available evidence and makes some extrapolations on the various people involved based on context and we end up with the whole story with emphasis on her later trial. The best part of the book, in my opinion, is how well Toobin manages to capture on paper the feel of the times, successfully placing the entire complex incident as part of the bigger picture. It's a riveting read.

Posted by Booksteve at 6:50 PM