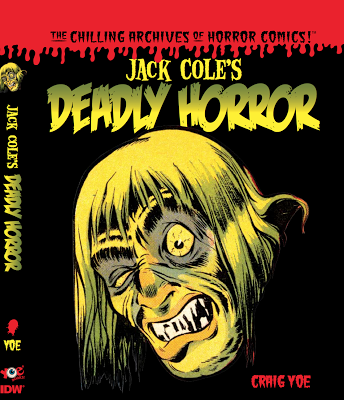 Ever since I first discovered his work, PLASTIC MAN creator jack Cole has been one of my all-time favorite cartoonists. When Craig Yo told me he was doing up a collection of Cole's horror comics I told him I didn't think he'd done enough to collect! He had mainly done superhero, humor and crime comics before jumping into panel cartoon success and finally newspaper strips. But leave it to Yoe! He found about twice as many as I thought were out there and along with his ad hoc gang of proofreaders and fact-checkers, we just put the finishing touches on JACK COLE'S DEADLY HORROR, the latest volume in THE CHILLING ARCHIVES OF HORROR COMICS. Looks like it's on track for early August. Now's the time to order your copy either online or through your local comic shop. It's a real scream!

Posted by Booksteve at 9:59 PM