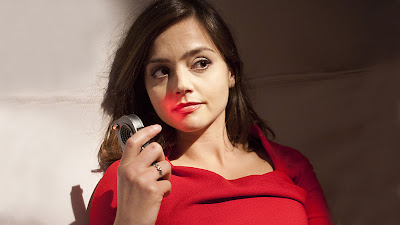 POSSIBLE SPOILERS AHEAD--I think I've figured it out, fellow Whovians! The Doctor meets young Clara (played by Jenna-Louise Coleman) in Victorian England. He does NOT see her as resembling the trapped Oswin Oswald  from the current season opener in any way since he never actually SAW Oswin and what WE saw was just in Oswin's own head, even.

Something happens that will likely kill Clara and The Doctor doesn't want that to happen. He determines he can save her but only by melding her mind with someone else's, similar to what had been done wit Donna. Where to find

a mind that wouldn't itself be damaged by doing that? Hmmm...Then he remembers Oswin and manages somehow to pluck her mind out of its Dalek shell just prior to her death but AFTER her adventure with The Doctor and stick it in Clara's head. The two minds heal each other giving Clara Oswin...or rather Clara/Oswin!...both a bit of Victorian naiveté and traces of being the sarcastic computer genius we all fell so quickly in love with as well!


Just a thought.
Posted by Booksteve at 7:47 PM