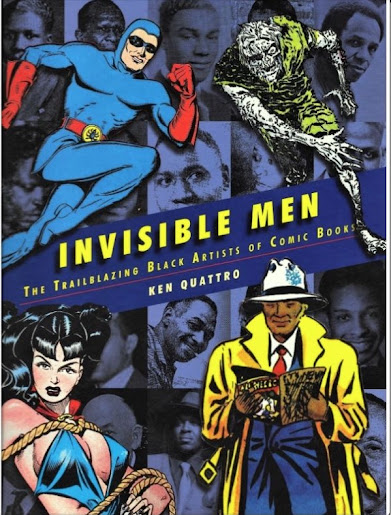 The 2021 Eisner Award nominations were released this week, the Academy Awards of comic books. In the running for Best Comics-Related Book is Yoe Books/IDW's INVISIBLE MEN, the indispensible comics history volume published late in 2020 by Craig Yoe, copy-edited by Randall Cyrenne, and researched and written by the indomitable Ken Quattro over a period of quite a few years.
INVISIBLE MEN is an important work of comics scholarship, revealing as it does the surprising number of African-American comics artists who have pretty much always worked in the field, albeit hidden for decades behind the anonymity of newsprint or four-color pulp paper curtains.
Chapter after chapter introduces the reader to not just the somewhat recognizable names of  Matt Baker or A.C. Hollingsworth but to more whose names had been covered up or forgotten: EC Stoner, Jay Jackson, Calvin Massey...
I provided some info to Ken years ago as he researched this book, and then worked a bit behind the scenes  as part of my long-term commitment to Yoe Books, so yes, maybe I'm a tad prejudiced, but make no mistake, this is a book that has long needed to be written and Ken Quattro has written it.
If you are a current or past comics professional, you are eligible to vote in this year's Eisner Awards and we hope you'll consider a vote for INVISIBLE MEN. Voting is open now for a limited time. With no Comicon again this year, winners will be announced in an upcoming online ceremony as last year.

______________________________________________________
While you're at it, if you don't yet have a copy, it is highly recommended! Since I was involved with it, however slightly, I never did a full review but any good collection of books about comics history needs to include INVISIBLE MEN by Ken Quattro! Order here:
https://www.amazon.com/Invisible-Men-Artists-Golden-Comics/dp/1684055865
Shout out also to quite a few of my other virtual friends who have this year also gotten well-deserved nominations: Trina Robbins, Mark Evanier, Noah Van Sciver, Grant Geissman, Kim Munson, Michael J. Vassallo, Roy Thomas, and my BACK ISSUE editor, Michael Eury! I only had a couple of short articles in the mag, myself,  last year but I nonetheless share in the pride of the nomination!
Posted by Booksteve at 4:47 PM