Stranger Things 3--The Return of Waldenbooks! 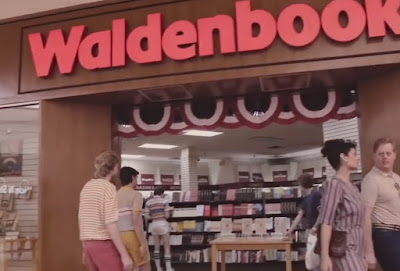 In case you haven't heard, STRANGER THINGS 3 premieres overnight tonight on Netflix. It's 1985 and mall life was still a major thing so a new mall figures prominently in the series' plotline. The producers have gone to apparently great pains to reproduce the look of so many long gone stores that used to be mall mainstays. One of these is Waldenbooks, my alma mater! Looks like they've done a reasonably good job...except they got the color scheme wrong!

Having spent most of the 1980s as a Waldenbooks Assistant Manager, I can assure you that the company insisted that every store look alike and that the corporate-provided signage was, as seen here in this 1987 shot I took myself, dark blue and a deep yellow. ST3 has the color scheme as red and white.

Now, here's the thing! Below is the front of my store when it reopened after a week and a half of remodeling in 1993. This was the first store in the country designed with a different look using the red and white color scheme...eight years after ST3. 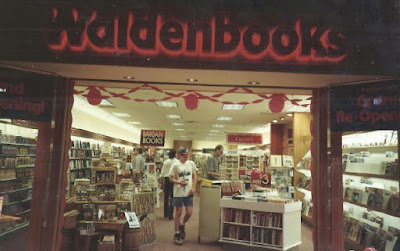 Someone told me I need to stop being so negative. I'm actually very pleased that they've re-created what was my second home for the better part of three decades. Just wished they had asked me first. ;P

Posted by Booksteve at 8:01 PM