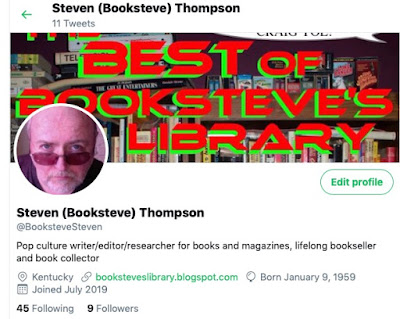 I am back on Twitter! This brand new account is my third personal account. I never really did much with the other two and a few months ago, Twitter locked me out of my account citing "possible suspicious activity." I was instructed to change my password and that instructions to do so had been sent to the email with which I had originally signed up. That would be one of a number of emails I eliminated a few years back. At one point, I found myself with a dozen different email addresses! I had long since consolidated them into my original email address. Twitter didn't care. Their advice was to contact my email carrier and work with them to re-establish my email address with them so I could then re-establish my Twitter account...and then apparently delete the email address again!

I should add that the reason I couldn't switch and use my actual email address is because it was already in use for another account. Over the past few years  I have been two other (real) people on Twitter. These were folks who needed a Twitter presence but either weren't tech-savvy or simply didn't have the time to keep up with it. By this point they're doing their own and I added one's email address to their account...but it still wouldn't let me delete my own and use it myself!

In my frustration, I wrote a long email to the Twitter tech service folks detailing in careful, simple English exactly what happened and what needed to be done to fix it. They assured me that it simply couldn't be done unless I restored my long lost, unwanted email address.

Personally, I think they were lying.

That said, I found that I was able now to create an entirely new Twitter account without using an email at all!

I'm still setting things up but I already have some followers (and some obvious fake trolls!) and I'd appreciate it if you'd give it a look-see if you Tweet.

At the moment, I've decided to use my Twitter to share some of the many photos, anecdotes, and stories I've gathered in my decades of bookselling! Those have been some of my most popular posts here at the blog over the years but I have plenty more that have never been documented so check me out! Info as to where to find me is in the above photo.