Back Issue Wins the Eisner!

TwoMorrows celebrates its 25th anniversary this year and the San Diego Comic Con celebrates its 50th! TwoMorrows' BACK ISSUE magazine celebrated its 100th issue not that long ago, too.

I haven't been to San Diego in 29 years but last year I had a piece I had written in their official program book and this year, I'm represented in the tribute book to the late Batton Lash by a reprint of a long interview I transcribed for TwoMorrows' COMIC BOOK COLLECTOR. Assuming it remains unedited, Batton even tells a story about me in the interview.

But there or not, last night...I won an Eisner Award! Or rather, I shared the Eisner Award for Best Comics-Related Periodical/Journalism with super editor Michael Eury and my fellow BACK ISSUE contributors such as John Trumbull, Andy Mangels, Jerry Smith, Rob Kelly, Mark Arnold, and all the rest! A learned bunch of geeks all around! 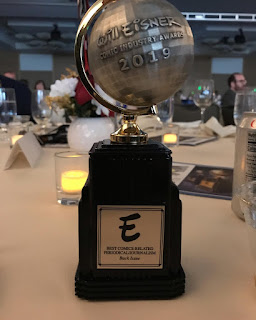 Oh, and we also shared the award itself with the digital mag PANELXPANEL. It was a tie!

Up top are the three issues that contained my writing last year. I wrote about Archie meeting the Punisher, about the many non-Archie Archie types of comics' Bronze Age, and a long, well-received  piece on Shang-Chi, Marvel's Master of Kung-Fu. I also contributed transcriptions, research, and moral support assistance to various other writers in other issues last year.

This year I only have one BACK ISSUE article, on Holo-Man. Came out a couple months back. I've already turned in one for 2020, though, on Mike Sekowsky's MANHUNTER 2070. And I have until November to finish another long piece for next year that covers...Well...Shhh! You'll have to wait and see.

Can't say enough about Michael Eury, by the way. A thoroughly professional editor and yet he never loses track of the fact that most of us aren't in a position to spend 24/7 on our assignments. And most importantly, he never loses sight of his audience. He fearlessly flies his own lingering fanboy tendencies and realizes that that's what his readership wants.

It's that kind of thinking that deservedly won him--and thanks to him, the rest of us!--the Eisner Award this year!

If you haven't looked at a copy of BACK ISSUE lately, check your local comic shop shelves or the TwoMorrows website. If you like what we do around here, I think you'll like what you see in BACK ISSUE. 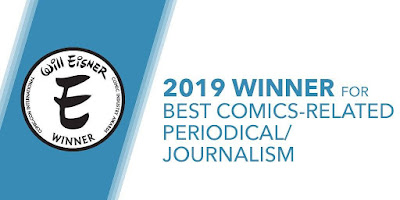 Posted by Booksteve at 7:58 PM