Here's something one doesn't see every day. This was, as the ad says, Kraft's "gala seventh anniversary show," produced in what we now think of as the Golden Age of live television. It's one of dozens of adaptations of Lewis Carroll's ALICE N WONDERLAND done in the 20th century. This one is distinguished (perhaps a poor choice of word) by the inclusion of superstar ventriloquist Edgar Bergen and his wooden sidekick, Charlie McCarthy (Murphy Brown's brother).

As often happened, it's an all-star production, although the stars are a bit low-rent. More like familiar names and faces to the audiences of the day. Bobby Clark of the defunct (since his partner committed suicide in the 1930s) comedy team of Clark and McCullough is one of the biggest stars, still sporting his drawn on glasses. The great Art Carney is said to be the Mad Hatter although you couldn't prove it by me. Looks and acts nothing like him to my eyes, although his performance does steal the show. Una O'Conner, Ernest True, Arthur Treacher, and Blanche Yurka are other names.

You all know the plot. Young Alice (apparently only 13 here but looking at least 17 if not older) and her friends Edgar and Charlie (!!??) follow a white rabbit down a hole and drink something that shrinks them and meet hookah-smoking caterpillars and Cheshire cats and attend a rather mad tea party before getting mixed up with a Queen and some tarts. 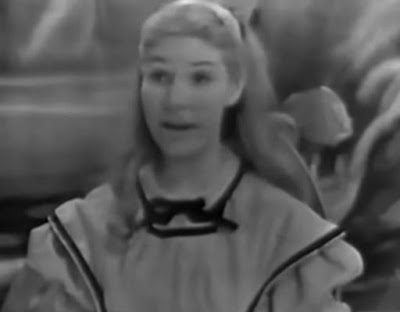 Yep...all three of them. More like Alice and Edgar and Charlie in Wonderland.
Robin Morgan, the actress playing Alice--however old she is--also played the younger sister to my old acting acquaintance Rosemary Rice on the classic TV series, MAMA around that same time.
What I didn't know until today was that she is, in fact, THE Robin Morgan--a women's movement pioneer since the early 1960s, one-time President of NOW, and former editor of MS. Magazine. She is seen here in 2005 with Gloria Steinem and Jane Fonda. 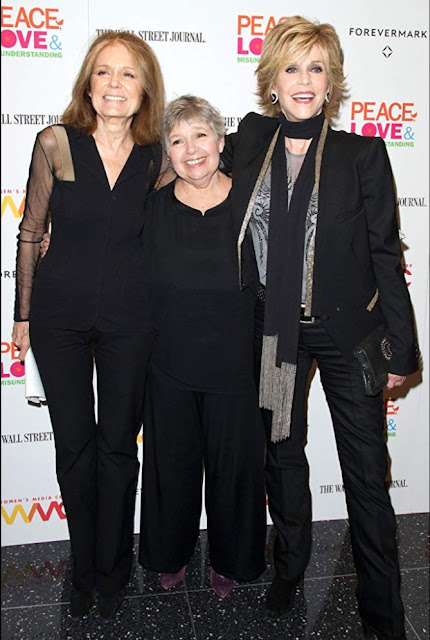 I wish I could say that it was some kind of odd classic but I pretty much agree with the below review from 1954. Read it and weep. As of this writing, the episode is on YouTube in its entirety. Watch it and let me know what you think.

Posted by Booksteve at 9:55 PM