Girls For Rent/I Spit on Your Corpse 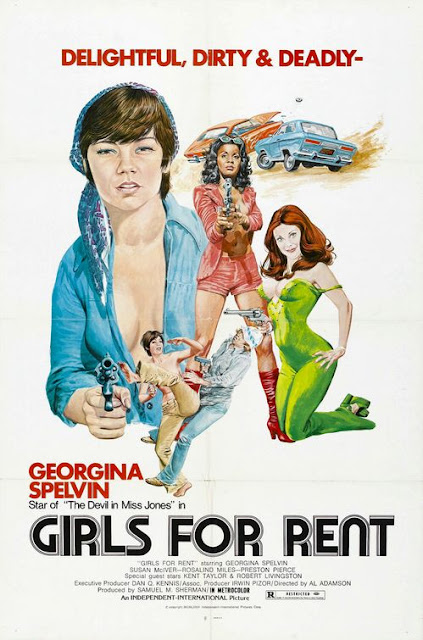 I watched a movie this afternoon--Al Adamson's GIRLS FOR RENT-- that I had only previously been aware of at all because of its poster, illustrated by the great Gray Morrow. One reason I avoided watching it was that it was long ago re-christened I SPIT ON YOUR CORPSE--such a lovely title. The reason I chose to finally watch it was that the picture's Director of Photography was the late Gary Graver, Orson Welles' longtime sidekick, whose bizarre and fascinating career I've become somewhat obsessed with in the lead-up to the release of the long-delayed THE OTHER SIDE OF THE WIND.

Perhaps another reason I ignored it was that the film's online description, lifted from somewhere and spread across the Internet, is the inaccurate, "A group of girls go on a cross-country killing spree." Turns out that's not even close to the plot of the picture.

This is, in fact, quite an entertaining low budget chase flick that benefits not just from Graver's superior photography but also a nice, lightly jazzy theme and an unusual cast of actors.

One trademark of director Al Adamson and producer Sam Sherman was to always have some recognizable Golden Age of Hollywood names in their casts. In this case, those roles fall to Kent Taylor and Bob Livingston, for both of whom this was their penultimate acting appearance according to IMDB.

Kent Taylor had been a leading man in A and B pictures of the 1930s and '40s and a reliable character actor ever after. He is also--along with Clark Gable--generally credited as having influenced movie lover Jerry Siegel in his choice of name for Superman's alter ego.

Bob Livingston was an old-time B movie cowboy hero, perhaps best remembered for his roles as the Lone Rider and also Stony Brooke, a role also played by John Wayne, in the Three Mesquiteers movie series.

Livingston was a close friend of producer Sam Sherman who used him a lot in his exploitation films. In this one, Livingston's real life son appears as well, Addison Randall. Addison was also the grandson of legendary producer Hal Roach--he of Laurel and Hardy fame--as Bob Livingston (real name Edgar Randall) had been married to Roach's daughter. Addison Randall has gone on to a long career in many different areas of the motion picture business including writing and producing.

The heroine of the picture is played by Susan McIver (now known as Susie Ewing), recognizable to many viewers at the time as the Captain of the dazzling all-girl performing song and dance troupe, the Golddiggers, so long associated with Dean Martin.

Preston Pierce plays the suitably stalwart hero. A rugged actor with very few credits to his name before dying at only 52, he is the most obscure person connected to this movie.

Rosalind Miles and Georgina Spelvin make up the film's double act as a pair of hit women relentlessly chasing down the heroine. (One of the other titles the film briefly had was FATAL PURSUIT.)

Miles had also been one of the two leading ladies (along with Kathy Imrie whom I interviewed in 2017) in SHAFT'S BIG SCORE.

The actual plot has Taylor springing Spelvin from a prison gang to front a call-girl operation that doubled as a kind of extortion/assassination bureau. When one of the girls balks at having been involved in a murder when she was told it was just blackmail, she makes a run for it. Spelvin and Miles follow in pursuit and that's pretty much the plot of the picture. Yes, there are a couple killings along the way but it's hardly "a group of girls go on a cross-country killing spree."

There's toplessness here and there, too, as was mandatory for this type of exploitation picture, and one surprisingly explicit (without actually showing anything) sex scene with a decidedly shock ending!

Overall, though, unusually entertaining for what it is, with charismatic performances (if not Oscar-caliber ones) from nearly everyone involved elevating what is at heart a basic chase picture at least a little above what it should have been and certainly far beyond its ridiculous, pointless I SPIT ON YOUR CORPSE title.

If you get a chance, and you aren't easily offended, you might actually like it. I did.