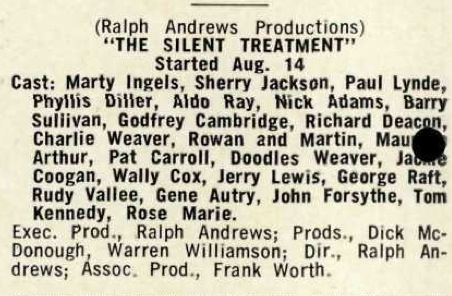 According to multiple reports in VARIETY and the Newspaper Archives, this late 1967-shot film was actually made. It starred the later controversial Marty Ingels and a cameo cast similar to that of later flops such as THE PHYNX and WON TON TON, THE DOG WHO SAVED HOLLYWOOD.

But was it actually finished? It was never released and not a trace of it has ever turned up in the public eye. I'm betting that shot of Marty below was just a general publicity pic even.

Later in the next decade, it would be Mel Brooks who ended up releasing the first new silent film in decades--SILENT MOVIE. Ironically, it was also peppered with cameos but from much bigger stars of the day--Burt Reynolds, Liza Minnelli, James Caan, and Paul Newman. It didn't do very well either. 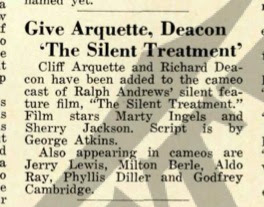 Posted by Booksteve at 3:34 PM