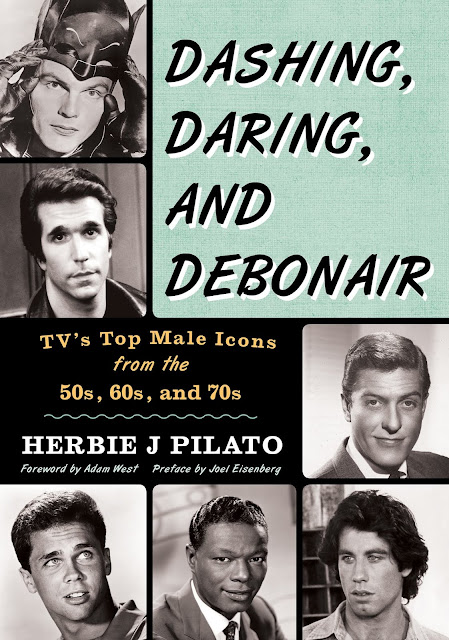 “Show business is my life.” It’s an old expression that’s morphed into a comic cliché over the years but for some people, it’s still a truism. One such person is author Herbie J Pilato. Herbie has grown up in and around the television industry and, as such, has undoubtedly seen much of the sordidness behind the screen. Unlike too many jaded others, though, Herbie doesn’t exploit the negative, preferring always to instead celebrate the positive!

It was that attitude that recently brought us his book called GIDGETS, GLAMOUR, AND THE GIRL NEXT DOOR, a delightful and nostalgic collection of biographical pieces on many of the dream girls of the classic television era.

Now comes that volume’s corollary, DASHING, DARING, AND DEBONAIR, TV’S TOP MALE ICONS FROM THE 50s, 60s, and 70s. Here we have 300 pages highlighting the actors who created so many of the characters that generations have taken to heart as members of their own families.

In fact, the book as a whole comes across like one great big family reunion in print! Everywhere one looks is a familiar face. Look! Over there! Hi, Mr. Roarke! Hey, Major Nelson! How’s Jeannie? Oh, and isn’t that Barnabas Collins talking with Joe Mannix and Perry Mason? And Batman himself—Adam West—provides the brief but lovely Foreword.

Separated into sections such as “The Doctors, the Defenders, and the Dependables,” “The Super Men,” and—my favorite chapter title—“Darrins, Dobies, Dons, and Bobs,” each individual portrait contains a brief bio, a career overview, some rare or previously unpublished quotes from and/or about the subject, and a nice little summation of why they were important in TV history.

If, like me, you live in the past a lot as far as your entertainment choices, no one here will surprise you. On the other hand, if you grew up with these performers in perpetual reruns, there may be some here you haven’t thought about in years. Maybe even a few you had actually wondered “whatever happened to!” 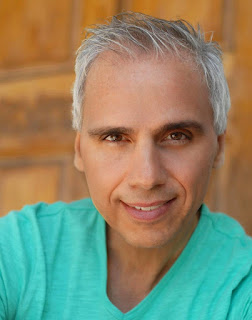 There are even a few non-actors such as Rod Serling, Gene Roddenberry, Nat King Cole, and Johnny Carson.

Yes, yes. One can quibble that there are folks such as Jerry Mathers, Sonny Bono, Robert Young, and Jack Webb who are neither dashing, daring, nor debonair. But by the time you’re immersed in their stories, you realize that distinction just doesn’t really matter.

Ultimately, DASHING, DARING, AND DEBONAIR is no less than an admiring overview of television’s idealized male image and the sometimes less than ideal real human men who brought those images so memorably into our lives and our hearts.

As always, Herbie J Pilato writes with a deep affection for the positive influences of classic TV in DASHING, DARING, AND DEBONAIR without completely ignoring the negative. Still, when you finishing reading the book, you may not ever want to watch a current TV series again! Break out those classic DVDs!

You can get a personally signed copy (or two! Christmas is closing in fast!) here: