His World-the Life and Times of Wallace Wood 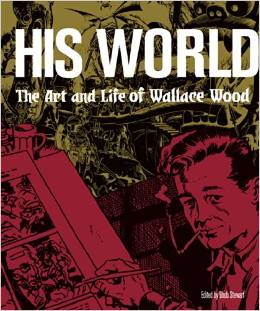 After more than a decade of working on what he hoped would be a definitive look at the life and career of comics artist Wally Wood, Bhob Stewart had a falling out with his publisher, Fantagraphics, and the long delayed book was delayed even longer. Eventually, it was released from Twomorrows as AGAINST THE GRAIN in 2005 in what Bhob apparently considered an overly-censored version. It sold well and when it went out of print, prices for copies skyrocketed. Bhob spent years reworking it, though, with an eye toward republishing an even better version. He went so far as to solicit all-new material from a number of folks, myself included. He even hooked back up with Fantagraphics.

Then, this past February, he died.

Now Amazon is showing this book, clearly the book Bhob had been working toward. No information as yet other than what's at the link. I don't even know if my chapter made the cut. I do know that Bhob loved it and that meant a lot to me. He wrote me and raved about it and asked for an "About the Author" paragraph, which I duly sent just a few months before his passing.

Next year, we'll see if I made the cut.

Posted by Booksteve at 6:48 PM