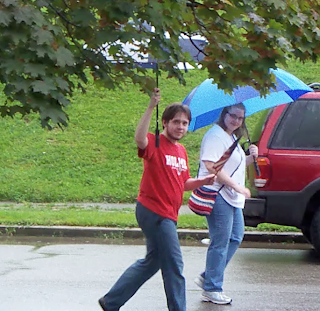 For the second time in 3 years, every basement on our block flooded with a geyser of rainwater and sewage when last Monday's rains were too strong for the drainage system and the sewers backed up. We had 3 feet of water in ours for a couple of hours and even then I had to wade out into the mess to unclog the drain before it would go down.

The last time, city officials declared that rain a "hundred year storm" and "the act of an angry God." They said it couldn't happen again. It did. For the 2nd time now we lost our hot water heater, our washer and dryer, our lawn mower and our heating and air conditioning system. Not to mention anything and everything we had stored down there except for some boxes on a high table.

Since the 2010 storm, also in July, I had been having panic attacks every time it rained. PTSD. In recent months, they had finally started getting a little better. Now, they're back full blast. As I write this, there's a good size shower pouring outside and my heart is racing. Sigh...

The main difference this time is that after last time, we added sewer backup insurance. We already got the hot water heater replaced and we're told that the insurance should replace the rest--with the exception of the lawn mower--sometime this next week. They'll also reimburse the cleaning supplies we had to buy and the man-hours I've put into it along with Rene and DeAnna. David can't really help because whatever clothes and shoes one wears down there are ruined and he has no old shoes or old clothes that fit!

After a week, it still isn't done. I'm just not fit enough to work for more than an hour or so at a time in a hot, smelly basement! We've thrown out about 20 bags of trash and various bits of furniture and other large items. We've hosed down the floor multiple times and brushed the water to the drain but there's still gunk in the edges and far corners. We have a dehumidifier running downstairs much of the time which helps (Thanks, Alan!) but it's still a mess! Ugh! Dee came back yesterday to help but I had already strained my back working down there earlier so we postponed until today. And now the heavy rains are back and we're getting groundwater leakage around the edges in the basement!

I took a hiatus from blogging because I knew I'd be exhausted from the cleaning every day for a while. I've started back on a few of the other Booksteve Blogs just a s a distraction basically but we'll still be closed here a little longer.

Thanks to those who have donated to our plight. Since we've had to borrow ahead from the bank's Early Access, we're now running way behind and any and all PayPal donations or DVD orders are appreciated even more than normal.

Rain chances drop from  80% to 40% after tomorrow so things MAY ease up a bit. Send good thoughts.

Picture is David and his friend Liz marching in the annual neighborhood 4th of July parade, cut short this year as...you guessed it...the rain picked up.
Posted by Booksteve at 8:36 AM