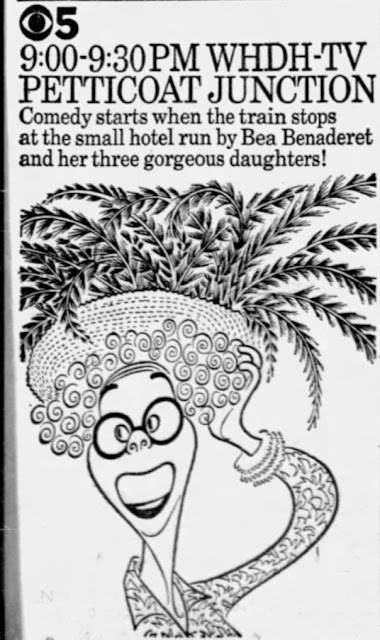 Been watching a lot of episodes of PETTICOAT JUNCTION lately and looked up the show's pre-history. Originally envisioned by producer Paul Henning as a BEVERLY HILLBILLIES spin-off to be called OZARK WIDOW, veteran sidekick actress Bea Benaderet would have starred as Jed's man-crazy"Cousin Pearl," a role she played in the first season of that series. As the show developed, though, all that changed, and while it was later retconned that its main character Kate Bradley (originally Kate Buckley) was a "lookalike" cousin to Pearl, in the beginning there were NO ties to BEVERLY HILLBILLIES. 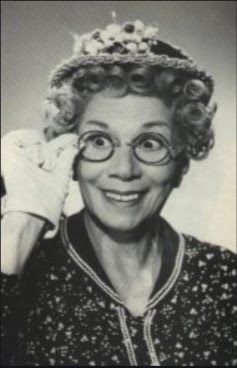 Apparently, though, it was hard to kill those early rumors as some newspapers reported as late as August that Bea would play "a man-crazy widow in the hills." There were no hills. Hooterville was a valley! Worst of all, though, had to be this ad which appeared in numerous papers around the country the very week the series premiered.  Pretty sure that's actual Al Hirschfeld art and not just imitation Hirschfeld but it clearly depicts Bea AS Cousin Pearl! If you recall the series, Kate Bradley couldn't have been any further from Pearl. Kate was matronly, quiet, easygoing, and the go-to person for everyone in the valley for every kind of problem they might have had.

All I can figure is that CBS had paid a lot for that Hirschfeld art and they weren't going to let it go to waste no matter what! 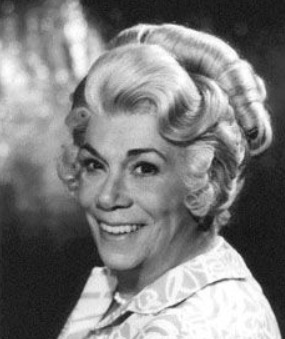 Posted by Booksteve at 5:41 PM