Booksteve Reviews: The Book of Weirdo 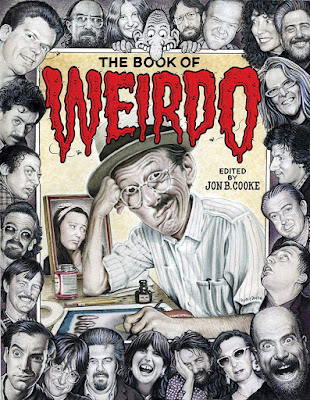 I have to confess two things up front. One is that I never read a single issue of Weirdo when it was new. The other is that I worked on the item at hand—The Book of Weirdo by Jon B. Cooke—off and on for about 6 months a few years back when I transcribed multiple interviews with publisher Ron Turner. I even make the book’s huge acknowledgements list. I sincerely doubt, however, that any person on that list—myself included—had a clue just how complete and madly obsessive the final product would turn out to be.

Jon B. Cooke, of course, is the man behind such essential chronicles of comic book history as the magazines Comic Book Artist, Comic Book Creator, and the sadly short-lived ACE (All Comics Evaluated).

But this book BY Jon B. Cooke is about a very different magazine, Weirdo, and the man behind that magazine was Robert Crumb. Confused?

Weirdo premiered in 1981, in a way a successor to the underground comix that had been largely replaced by the independent comics boom that would ride out the decade. Intentional or otherwise, it was also a purposely low-fi response to Art Spiegelman’s Raw, itself an attempt at raising the underground work to a true art form.

Spiegelman’s later Pulitzer Prize for Maus aside, if the average American of any age thought of comix at all by the time of the Reagan administration, there is no question they only knew one name and that one name was R. Crumb. 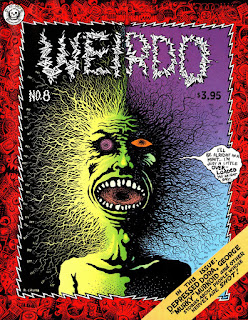 There is also no question that Weirdo was Crumb’s idea and Crumb’s baby, in spite of the fact that he was only the first of three very different editors during the mag’s original 1981-1993 run.

At first, it seemed tricky to review The Book of Weirdo without reviewing Weirdo itself but really there’s little comparison. Weirdo—which I have now read—still doesn’t interest me that much. Some of Crumb’s covers are among my favorites of his work. A number of interesting underground creators like veterans Spain and Kim Deitch are joined by then-lesser known names such as Dori Seda, Drew Friedman, and Ace Backwords. Looked at as a whole, Weirdo was a wonderful concept designed to both showcase and celebrate outsider art.

Still not really my thing, though. But it IS Jon Cooke’s thing and he does go out of his way here to look at Weirdo as a whole, from the front, the back, the top, the bottom, the left, the right, the over, the under, the dark, the light, the yin, the yang…You get the picture.

There are two types of history books that I really like. One is the type where the author goes to every possible extreme to look under every rug and tell the reader every bit of info they could ever possibly want to know about a subject.

The other is an oral history, where the author gets those involved in the story he’s writing about to give their own version of what happened and how it felt. This often leads to conflicting versions but somehow, when all the versions are combined, something very close to the truth is conveyed.

Jon B. Cooke’s The Book of Weirdo, beautifully packaged from Last Gasp and sporting a brand new Drew Friedman cover of Robert Crumb, works perfectly as BOTH types. Ipso facto, The Book of Weirdo is a book that I doubly like!

Booksteve recommends.
Posted by Booksteve at 10:53 AM