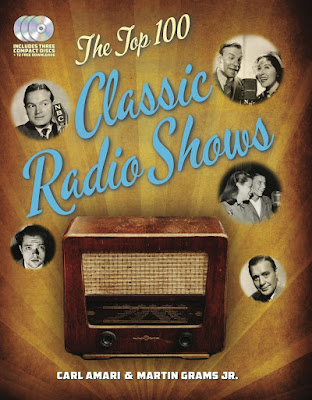 When I was about 11 years old, a substitute teacher brought to class a record album featuring two episodes of The Shadow, a radio series I was familiar with but had never actually heard before. Immediately, I was won over to the concept of the “theatre of the mind” and started buying LPs of episodes myself. My friend and I even used my cassette recorder and some sound effects records to record our own versions of dramatic radio episodes!

That was nearly 50 years ago and I’ve been a fan ever since. I’ve easily listened to several thousand original radio episodes by now and for many years was privileged to perform in script re-creations—sometimes with the original actors—at various venues.

So I know a few things about old-time radio shows.

That said, the upcoming book, THE TOP 100 CLASSIC RADIO SHOWS, written by Carl Amari and Martin Grams, Jr. manages to find something new that I didn’t know on every other page or so! 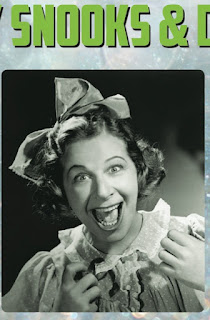 There have been scores of books on classic radio and I have many of them here in my library but this one is different. Most of the old ones were written by people who were there the first time around and aim for a nostalgic look back for those aging fans who grew up with THE LONE RANGER, GANGBUSTERS, and THE QUIZ KIDS. I, myself, missed that generation, and the authors here are even younger.

THE TOP 100 CLASSIC RADIO SHOWS is a respectful look at the history of the shows covered, yes, but it also offers a succinct introduction to readers completely new to the medium and considers each series on entertainment merit rather than pure nostalgia.

The phrase “old-time” has long become an anchor to our rich radio past making it off limits to many who stubbornly avoid “old-time” entertainment like black and white movies or television only to enjoy it if they’re actually subjected to it.

This book, then, is a catalog for those people, showcasing the most memorable series, offering some visual accompaniment, and even presenting some wonderful trivia to those of us who thought we had heard it all. 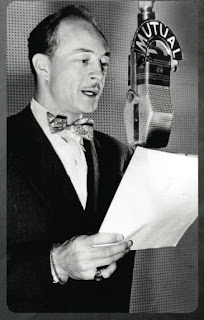 The only overall problem I have with the book is the understandable constraint that every show has to fit into two pages. So many of these shows had such a rich history and background that one or two additional pages could easily have been used. I mean, seriously, squeezing what they did of the story of Amos ‘n’ Andy onto just two pages couldn’t have been easy!

Although some are unnecessarily repeated in different sections, you’ll find plenty of rare photos of radio performers as well as some lovely and unique design work for each section and each individual series. The warm, rich color tones throughout give the book the same warm, rich feelings that one might have gotten when gathered with the family around the RCA floor radio in the living rooms of the 1930s or 1940s.

As with any book like this, one can argue that a deserving favorite was left out (LET’S PRETEND anyone? ADVENTURES BY MORSE?) but it’s hard to argue that anything that made the final cut isn’t deserving.

Complaints? Inevitably, there are a few small mistakes that I won’t mention because they may be cleared up by actual publication. Also, the tight wording required in some instances doesn’t give as full a picture of some things as one might like. An example would be where DICK TRACY IN B-FLAT, the classic 1945 COMMAND PERFORMANCE all-star musical parody of the popular comic strip, is noted in the DICK TRACY section as simply being a “special hour-long presentation.”

Perhaps best of all is that the book itself will come with CDs featuring actual episodes of the shows written about within and with 72 additional high quality episodes available to download!

Carl Amari and Martin Grams are the perfect authors for such a project. Both discovered classic radio at a very young age and both did something about it. Carl founded Radio Spirits, which made available amazing sets of shows on cassette, and later CD. He later produced his own radio shows! Martin, meanwhile, has become THE foremost chronicler of individual series with thick books on, among others, DUFFY’S TAVERN, SUSPENSE, and THE SHADOW! 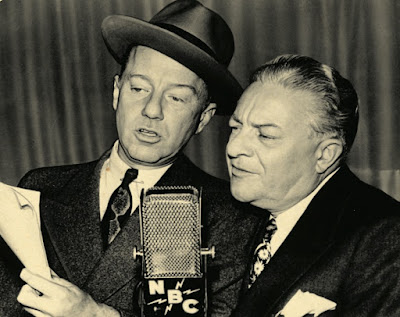 To classic radio buffs I say this is NOT just another book with info you’ve seen a hundred times before.

To those of you who aren’t fans, I envy you. Take a look—and listen—to THE TOP 100 CLASSIC RADIO SHOWS and you may discover a whole new obsession. Classic radio is NOT a dead language. It’s right there, waiting to be rediscovered. Here’s your chance!

It won't be out until November but you can pre-order now at the link below!

Posted by Booksteve at 1:23 PM