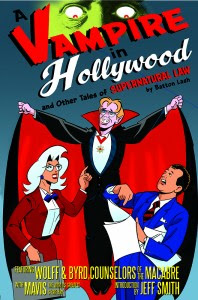 Alanna Wolff and Jeff Byrd introduced me to Batton Lash a few decades back in TBG (or CBG. I can

never keep track). Batton is the fella who chronicles their legal cases specializing in Supernatural Law. He's also the best-dressed man in comics!

A bit more than a decade ago, I actually met Batton--although not in person--when I interviewed him about, of all things, Alanna Wolff and Jeff Byrd...and Jack Benny! Since then, I've spent some quality virtual time with Batton in Riverdale and then we hung out with Bart Simpson's favorite superheroes as well!

This past year, I transcribed a long interview that someone else had done with Batton in which, a bit weirdly, he suddenly talks about me!

Now, here he comes again, with Alanna and Jeff back by his side, looking for VAMPIRES OVER HOLLYWOOD! That's the title of the new Kickstarter campaign to publish the latest Wolff and Byrd collection!

Let's face it, an increasingly large portion of today's comic books stories from anywhere just plain suck! It's folks like Batton, though, with not just his smart writing and deft drawing skills but also his understanding of both the medium and its history, that keep me from giving up on comic books completely.

There are lots of worthy causes out there these days asking for your money for support. If you're a comics fan, I ask you to consider donating to VAMPIRES OVER HOLLYWOOD! Thanx!

Posted by Booksteve at 6:54 AM