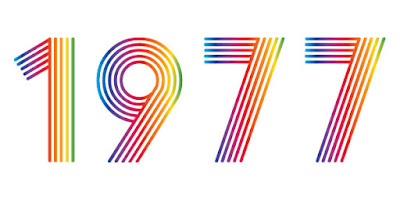 Yesterday I was searching through boxes upstairs for something I never found. Along, the way, though, I found a number of interesting things, not the least of which were a handful of documents I had written at the tail end of 1977, 1978, and 1979, summing up the years, one summing up the decade entirely, and several pages of week by week notes about the now barely remembered acting class I took in 1979-80!

Along the lines of my journal posts (see those blogs) I was 18-21 here and they are positively drenched in late teenage angst! That said, they have reminded me of some observations and details I had long forgotten.

For example, just from 1977! 1977 was more of a red-letter year than I remembered. Not only did I graduate and see STAR WARS 8 times but I also wrote the following, foreshadowing much of my own future.

“In 1977, I became ever more deeply embroiled in old movies, seeing for the first time MUTINY ON THE BOUNTY, ANGELS WITH DIRTY FACES, GONE WITH THE WIND, AND SOME LIKE IT HOT, among many others.”

“On the comics front, I began buying DETECTIVE COMICS again as they quickly picked up the best art and scripts in the industry! MASTER OF KUNG-FU continued at a very high level as well, as did AVENGERS, ALL-STAR, SUPERMAN, TOMB OF DRACULA and a few others.” This was the great Englehart/Rogers DETECTIVE run.

“My private library has grown steadily and by this evening has just about outgrown last Christmas's new bookcase.” I had John Toland’s HITLER, THE COMPLETE SHERLOCK HOLMES (which I gave to one of David’s friends last year), TUNE IN YESTERDAY, and a bunch of paperbacks. Buying books—and bookcases—would take up more and more of my money in the years to come.

“On the music front, my tastes broadened this year to include KISS, Emerson, Lake and Palmer, and Big Band Music.” Had planned on seeing KISS in Cincinnati on my 18th birthday that year but they were snowed in elsewhere and had to cancel. Never did see them.

“Old radio shows became a favorite subject and I acquired several books and albums on them, also.” The Big Band Music was the first thing I discovered on WVXU radio, followed by their weekly old time radio broadcasts. Over the next few years, I would get more and more involved with WVXU, eventually appearing as a guest and later a guest host on their Trivia call in show. As recently as last month, my wife appeared on what is NOW WVXU on a talk show. The spirit of WVXU lives o, however, on WMKV, where last night I listed to THE WHISTLER and this morning to some Big Band Music.

I noted that I had met the following comic creators at conventions—Steranko, Jay Disbrow, Frank Thorne, Michael Netzer, Bob Layton, Joe Staton and Barry Windsor-Smith, all of whom I remember seeing. BUT...I also note meeting Al Milgrom, Nick Cardy, Roy Thomas, and Jeff Jones! I do not have the slightest memory of meeting or even seeing any of them and since several were and remain major favorites of mine, you’d think I’d recall! I actually do work from time to time for Roy Thomas and became Net friends with the late Jeffrey Catherine Jones and to the best of my recollection, I never met them...but why would I have written it in something that no one else was meant to ever see at the time?

“I began to buy THE WRITER and also to send out query letters but no actual submissions yet. I started work on an article about classic horror movie stars.”

“I became increasingly enthralled with photography.” Backburnered for many years, my interest in photography blossomed finally on the Internet with my late, lamented BRITTANY ROSE AND ME blog.