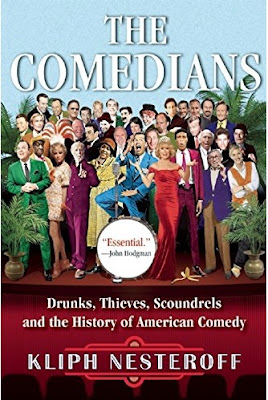 Those of us who know where to find such things online have for years enjoyed, via various sites, Kliph Nesteroff’s obsessive and perceptive interviews with show biz folks that no one else ever thought to speak with before. In fact, before I read Kliph’s first book, THE COMEDIANS: DRUNKS, THIEVES, SCOUNDRELS AND THE HISTORY OF AMERICAN COMEDY, I think I was expecting it to simply be a collection of these unique interviews. But that's not what it is at all. Instead, Kliph has managed to distill a pretty full and more or less chronological history of American humor and stand-up comedy by taking bits and pieces from his interviews and articles, mixing and matching and rearranging them into a timeline to give considerable insight into the overall bigger picture. In spite of the fact that I was already familiar with much of this history, I was delighted to find myself surprised with something new and interesting literally every couple of pages...even if it wasn’t always pretty. Kliph’s warts and all approach spares no one but likewise judges no one. As an author, he is, as they used to say, just tellin' it like it is.

THE COMEDIANS is not quite what one would term an oral history but it does have a lot in common with that format in that the author allows the participants to speak for themselves whenever possible. The voices of those long gone appear, too, often from forgotten, candid interviews that Kliph has unearthed.

The story itself is fascinating, with its cast of all-too familiar faces and types. The nice guys, the egotists, the legends, the mobsters, the millionaires and the mugs, all have a light shown on them long enough for the reader to fully grasp their place in the overall landscape portrait of American live comedy.

For every Jonathan Winters, Richard Pryor and Jerry Lewis, you’ll meet a B.S. Pully, a Bobby Ramsen and a Dick Curtis, all just as deeply entrenched in the comedy story on their own level. You learn the truth about Lenny Bruce that time’s perspective can now let us see. You learn about the blacklisting in the 1950s with its life and death consequences. You learn just how all-pervasive was the mob involvement in the business...and how that wasn’t always a BAD thing!

Behind the scenes stories of Vaudeville and Burlesque lead to coverage of the evolution of comedy on Broadway, in radio, movies, records, and television, and then back to the stage in Vegas and beyond. About the only form of American comedy not presented here is print. And that’s what you have another recent book for: HARVEY KURTZMAN—THE MAN WHO CREATED MAD AND REVOLUTIONIZED HUMOR IN AMERICA by Bill Schelly. Taken together, they give as complete an image of “FUNNY” in America as one is likely to ever get until the British influence is tossed in.

Kliph Nesteroff’s THE COMEDIANS is that rare book that treats comedy seriously, without being stuffy, in an attempt to give humor its due as an important aspect of US history and culture. For anyone the least bit interested in comedians of either today or yesterday I’m happy to say this book is indispensible reading that will likely remain unchallenged for a long time.

And I for one can’t wait to see where Nesteroff’s dogged determination to define pop culture from the inside out takes him next time!

THE COMEDIANS: DRUNKS, THIEVES, SCOUNDRELS AND THE HISTORY OF AMERICAN COMEDY is due out in November, just in time for Christmas, but you can pre-order it now at this link:

Thanx to NetGalley, Grove-Atlantic and Kliph Nesteroff for the opportunity to be an early reader of this soon to be classic. Now it's YOUR turn.
Posted by Booksteve at 12:30 AM