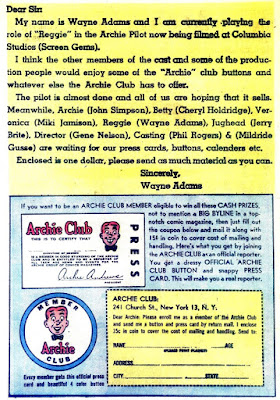 An interesting letter from the actor playing Reggie in the early '60s ARCHIE TV pilot. The show didn't sell although it wasn't that bad. Just similar, I think, to too many other series of the period. Tried to look him up on IMDB to see if Wayne Adams ever did anything else in show business but I believe they have two folks with that name mixed up as, according to them he would have been 34 years old when he played Reggie.

Posted by Booksteve at 8:56 AM