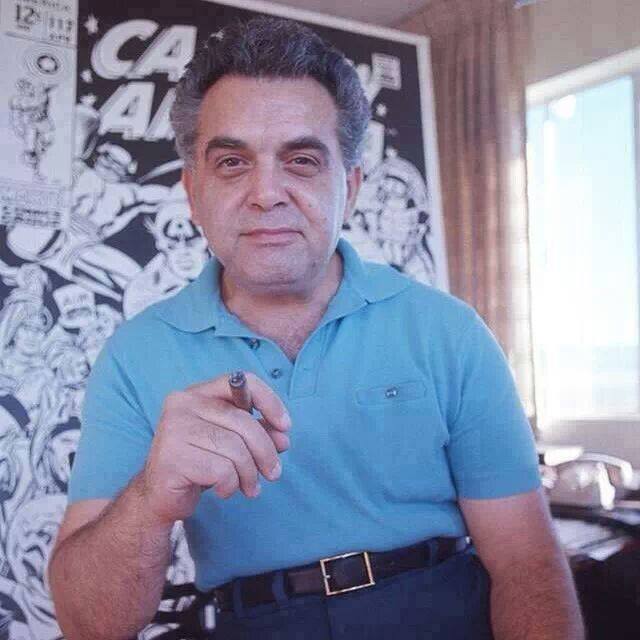 By all accounts, Jack Kirby was an unassuming man and I can't help but think he'd be flabbergasted by the continually building impact his long ago comic book work continues to inspire in the world's popular culture.

I started collecting comic books--as opposed to casually looking at the pictures before I could read--in 1966 and by the end of that year, I had noticed that Jack Kirby's name was on many of my favorites. The Human Torch! The Thing! Captain America! With back issues cheap and plentiful in those days, I soon found him also on X-Men, Avengers, Iron Man, Hulk, Nick Fury, Sgt. Fury, what seemed like a gazillion giant monster stories, and even something called FIGHTING AMERICAN!

When I hit the point that I decided I was too old to continue buying comic books, it was Jack who convinced me of the folly of that type of thinking. He did it with the Forever People, the New Gods and Mister Miracle, followed with a dose of The Demon, Kamandi and Sandman!

Via Steranko's history, I learned he had co-created kid gang comics and romance comics. I learned he had also co-created Fly-Man (as the Fly). But it was FANTASTIC FOUR that stayed with me the most, living to its pretentious subtitle of "The World's Greatest Comic Magazine." Kirby's long run on FF with Stan Lee providing the snappy dialogue still stands out to me as the milestone of comic book milestones. Always the remarkable craftsman, Jack's imagination seemed to grow by leaps and bounds in the Silver Age days of the so-called "Marvel Age of Comics." The FF themselves may have been throwbacks to Plastic Man, Invisible Scarlet O'Neil, Jack's own monster titles and the original Timely Torch, but from there things grew by leaps and bounds! Dr. Doom! Black Bolt and the Inhumans! The Black Panther! The Silver Surfer! The Kree! Galactus! It was as though Jack's consciousness expanded on its own without the need for any of the assisting pharmaceuticals utilized by some other cartoonists of the day.

Today, it is Jack Kirby's creations who still form the background basis of the Marvel Universe, both in print and on the big screen. It is Kirby's "failed" concepts--Darkseid, Apokalips, the New Gods, etc--that form the backdrop to DC's comic book universe.

Oh, and did I mention that along the way Jack Kirby's mother box concept foreshadowed today's pocket computer tech by about four decades? What was a convenient fantasy plot device in Kirby's Fourth World Saga is now an everyday reality of 21st century life.

By all accounts, as I said, Jack Kirby was an unassuming man. He lived long enough to know that thousands of fanboys worshipped him but I'm not sure he understood that. He just liked to draw and being creative was how he made his living. In real life, he wasn't a man of action. He never went out looking to help people in trouble. He just picked up his pencil in the morning and drew. For about 5 decades. It's what he did. But it was more than enough to make Jack Kirby one of my heroes. One of a LOT of people's heroes. He taught me that perseverance is a good thing, that good should always triumph, that imagination and creativity should never have any boundaries!

Thanks, Jack. Sorry you won't be here for your 97th birthday today but don't worry. We remember.