The Year of the Beatles-Maureen Cleave, Part One 1963

Maureen Cleave was already covering the pop scene in England for London's EVENING STANDARD before the Beatles came along. In late 1963, still several months before the Fab Four conquered America, she spent several days with them for this telling and then-unprecedented three-part profile of four still-ridiculously young men who had already been through a lot together and couldn't even imagine what was about to happen to them next. Parts 2 and 3 to follow. 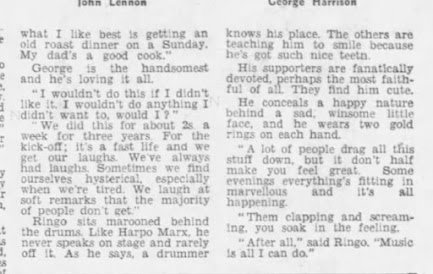 Posted by Booksteve at 5:42 AM