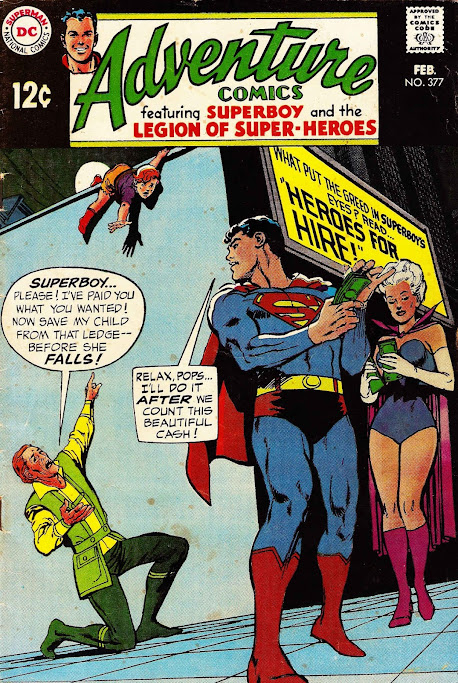 Unlikely Stories--The latest in a very occasional series. (The first was published in a fanzine in the 1990s, the most recent here on this blog about eight years back!) The concept is to take any Silver Age comic book story at random and look at it through a more demanding eye than a child reader would have done at the time of publication.

Long before Marvel had a title with that name, we have today, “Heroes for Hire,” a late Silver Age Legion of Super Heroes story from the February, 1969 issue of ADVENTURE COMICS.

Our story opens in deep space where a Science Police rocket ship—labeled U.P. for United Planets—is relentlessly pursuing a “fleeing criminal” across the galaxy. No indication of his crime that would justify such a chase, mind you, but the alleged bad guy eventually touches down on the planet Modo. This is something one of the Science Patrol officers is reluctant to do, asking his balding, overweight superior, “Haven’t you heard of…Modulus?” 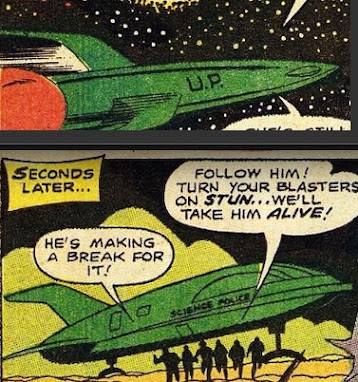 “Bah…Space bilge!” is his reply and the ship touches down on Modo…only now it’s shaped entirely differently and says “Science Police” on the side where it said U. P. before. The guy being pursued has crashed his wounded ship but runs off away from it with no injuries whatsoever nor any problems with Modo’s atmosphere. 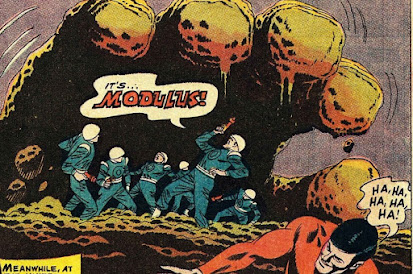 Six Science Police officers, also without any problems in the alien atmosphere, give chase, only to have the planet itself form a giant dirt hand to grab them as the perp makes a cackling getaway. Cut to…

Several Legionnaires are using their flight rings to fly toward the United Planets “Mind Drug Research Center,” summoned there because of a robbery in-progress stealing the center’s “forbidden mind drugs” to sell on the 30thcentury black market.

On seeing the heroes arrive, one of the thieves yells out, “Use Preparation L!” which would, presumably, be more effective under the circumstances than Preparation H.

In this case, though, it’s more like “L” as in “LSD” as we’re subjected to not one but two pages of Brainiac 5 freaking out on a very psychedelic bad trip, at least as psychedelic as veteran comics artists Win Mortimer and Jack Abel could draw it. One can only imagine those pages in the hands of a more experimental artist like Ditko or Steranko! 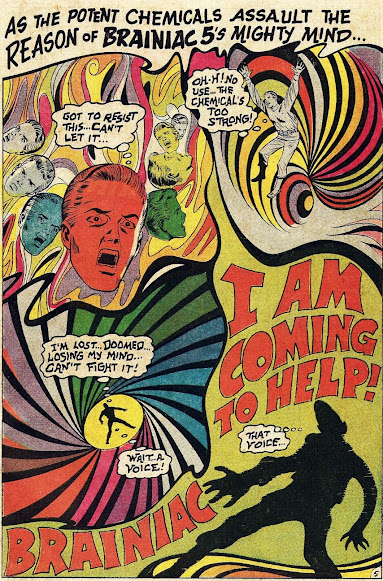 The late-arriving Superboy sucks up the gas, which serves to bring Brainy down quickly without having any effect on Superboy himself. The other Legionnaires find one of the crooks and take him in for “Interrogation,” which turns out to be a major privacy-violating super-hypnotic thought reading machine. Under its influence, they are told that Modulus IS the planet Modo. A living planet! You know, like Marvel created a couple years earlier in Thor with Ego. It’s said that even Superboy can’t go there as there is a known supply of Kryptonite on Modo.

So, instead, the Legion sits tight and allows a crime wave to overtake Earth. Not sure why, as it seems they could easily capture the bad guys before they got anywhere NEAR Modo, which, as we’ve been told, is in “deep space.”

Meanwhile, Superboy—who’s spending an inordinate amount of downtime in the 30thcentury but that’s another story, I guess—refuses to rescue a millionaire’s high tech plane full of passengers until a fee is negotiated. The millionaire pays, but vows to trash Superboy’s good name to the public. Meanwhile, Karate Kid has had a similar experience, saving rare books (good to know the 30thcentury still HAS books!) for a fee of five million dollars.

The Legion members—the same few. No indication where the others are—appear the next day on the show, MEET THE PRESS—still going after ten centuries! Gotta be some kind of record there! Superboy, using language that came AFTER his time period, and no doubt died off centuries before the one he’s in, tells the world, “We’re just trying to earn a little bread the only way we know how.” The public turns against the Legion and as they walk away, Superboy is so distracted he even steps in his word balloon!

Brainiac 5, Karate Kid, Princess Projectra, Duo Damsel, and Superboy decide to leave Earth for a friendlier planet but, instead, operate out of a Legion Cruiser in deep space with an apparently limitless fuel and oxygen supply.

We see a news broadcast about the epidemic crime wave and how the Galactic Guard—analogous to the National Guard?—has blockaded Modo to no effect.

We next see Superboy refusing to save a little girl trapped on a high building ledge on the radioactive planet of Gnogg which looks a lot like future earth only, presumably, the humans are all radioactive. After a long and agonizing negotiation, the child’s father pays the Boy of Steel 500 Ergloks—pure radium—and he finally uses his super-breath to catch her just before she hits the ground! 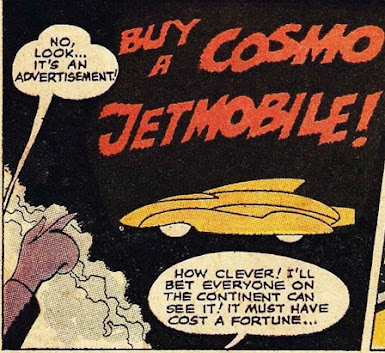 Projectra earns living crystal money using her illusions to create advertising on an alien world, while Karate Kid enters an amateur boxing match for pay. Superboy brings in some money that’s just balls of pure energy. A mysterious radio call comes in from Duo Damsel but, after this, the members return to Earth somehow and go on a mad spending spree, leaving their home-away-from-home ship lying in deep space, where some criminals decide to take advantage of their absence and attack it for the riches everyone knows the Legion has amassed! “We caught ‘em by surprise. The ship’s losing oxygen,” says one after they zap the red rocket with a ray. The reader, however sees a gigantic hole straight through the center of the spacecraft so presumably it’s losing more than just oxygen! 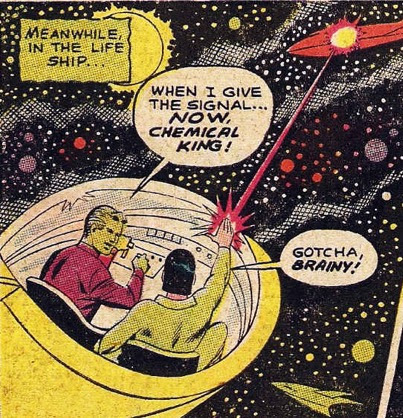 Just then, though, Brainiac 5 and a Legion member we’d not yet seen in this issue, Chemical King, escape in an escape pod. From a safe distance, the latter uses his power long range to start a chemical chain reaction that causes a Rube Goldberg-like progression in which the living crystal money is freed to eat the energy ball money and the radium money, etc, etc, ultimately creating paralysis rays that paralyze everyone and everything on Modo when the bad guys tow the ship there to clean out its loot. Brainiac 5’s plan worked like a charm! Or should we say young writer Jim Shooter’s? We discover that Duo Damsel was the one who went and found Chemical King, on whom the plan was completely dependent! Mighty far along before they noticed he wasn’t on board with it—literally AND figuratively! Brainy notes that even Modulus was paralyzed and will be “helpless, once off Modo.” Wait a sec. I thought we established Modulus WAS Modo! Seeing as how Modulus turned out to be almost completely incidental to the issue’s plot, I guess it doesn’t much matter. What matters is that the Legion will now pay back everyone with interest and their reputations will immediately be restored. Surely there won’t be any intergalactic lawsuits or anything. So, as we leave our tiny band of heroes (and again, there were like 25 members at this point. Were the others even consulted on this plan?) in a second big red Legion cruiser, this one with LEGION written in gigantic letters on its side, my question is…whatever happened to Superboy? He disappears from the story completely after sort of rescuing that poor little girl who will likely be traumatized for the rest of her life because of his callousness!

Sadly, it was stories like this that got the Legion strip canceled for a time just three issues later.

Posted by Booksteve at 9:30 PM