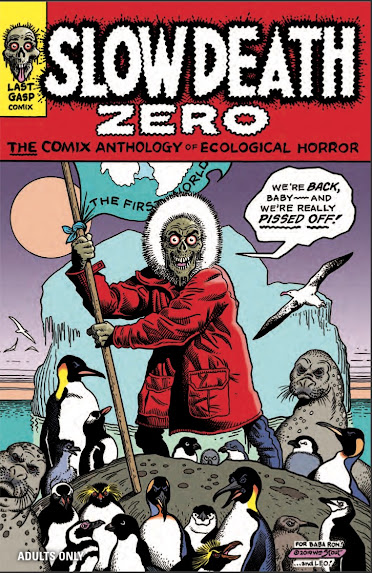 In the interest of full disclosure, allow me to point out that while I did not work in any way whatsoever on this book, Jon B. Cooke, Slow Death Zero’s co-editor alongside legendary Baba Ron Turner, is also my editor on the TwoMorrows magazine Comic Book Creator, where I will have a regular column beginning soon.

Turner himself, the “unreconstructed hippie” who turned Last Gasp Eco-Funnies into a successful small press that’s lasted for more than half a century, acts as your host for many of the book’s entries, a modern-day Crypt Keeper, if you will. He’s even a character himself in one story. 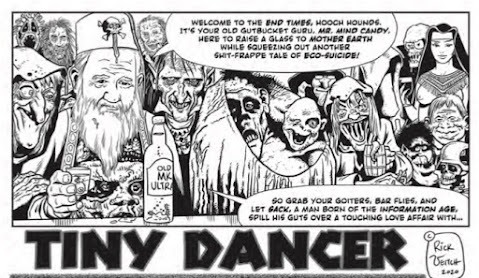 William Stout, who in 1975 did the memorably deranged cover of Slow Death # 7, returns here to provide another memorable cover, this one filled with endangered Antarctic species glaring at the reader while a skeletal figure in a bright red coat plants a flag, all under a title delineated in an appropriately E.C.-style font.

Subtitled “The Comix Anthology of Ecological Horror,”Slow Death Zero is, like the 11-issue underground comic that preceded it, a diverse collection of stories that hit home because they hold up uncomfortable truths and force us to look at them whether we want to or not. 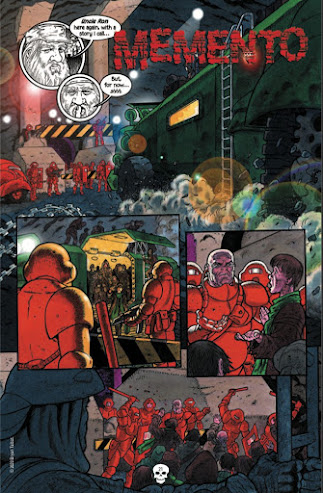 And diverse doesn’t really begin to describe the material on view here, from the gorgeously traditional Bryan Talbot color artwork in what I feel is the book’s overall best piece, to the virtually incomprehensible black and white scrawling of Savage Pencil, an artist equally as respected in some circles. 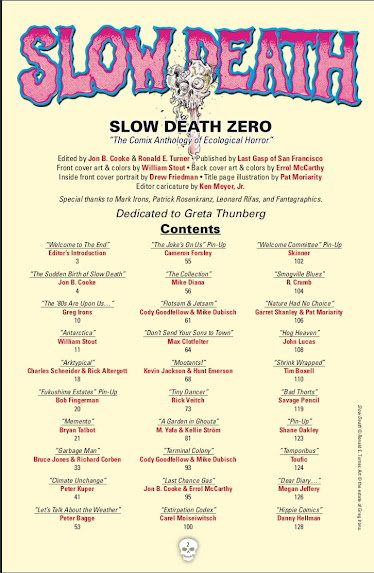 In between, you have folks like Stout, Errol McCarthy, and Tim Boxell, contributors to the original version, and even R. Crumb and the late Greg Irons with older material. Hot contemporary cartoonists like Peter Bagge and Peter Kuper are here, as is the notorious Mike Diana, the only cartoonist ever convicted for obscenity in America. Recognizable names such as Bob Fingerman, Danny Hellman, and the great Rick Veitch show up throughout, along with a baker’s dozen stories of varying quality by writers and artists whose work I had never before encountered. Drew Friedman and Ken Meyer, Jr. also appear. 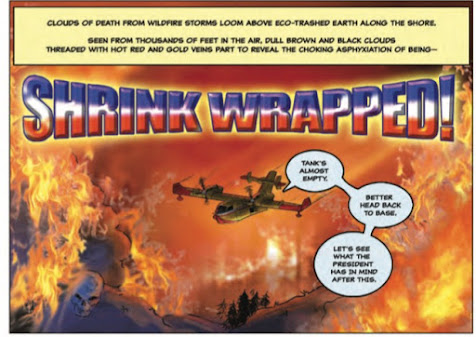 As with any anthology, I didn’t actually like all the stories. Some are just kind of there and a couple are fairly incomprehensible. And yet they all fit. No one ever said art had to be pretty. 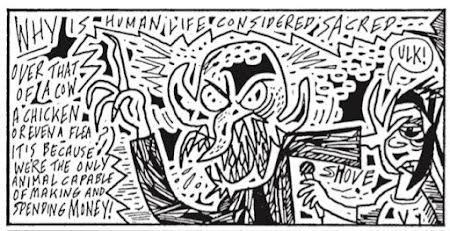 To single out a couple of the best stories, though, Bruce Jones and the late Rich Corben offer up the black and white “Garbage Man,” a darkly humorous and tragic post-apocalyptic tale very much in the tradition of the early underground stories that brought Corben fame. This is his final comics story.

“Mootants,” by Kevin Jackson and (one of my personal favorites) Hunt Emerson, is a light-hearted, colorful, but powerful tale of our changing environment and its effect on the moose population. 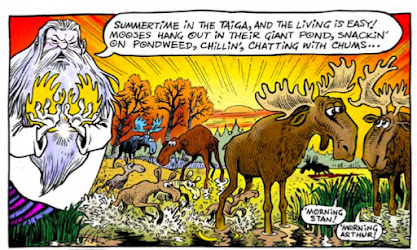 All the stories in the book are about our changing environment, global warming, pollution, and the climate crisis. In fact, the book is even dedicated to young Greta Thunberg, the activist who has given at least some hope that her generation will care more than ours has, and maybe—just maybe—be able to stem the seemingly inevitable tide of self-destruction.

That’s how the reader feels by the end of the book. Most of the stories herein are at best bleak and unnerving, holding up a mirror to show that we are the monsters who are destroying Mother Earth. Some, like Stout’s “Antarctica,” offer at least some hope. Fantasy, science-fiction, humor, and a long piece on the true horrors of modern warfare all swirl together in the best underground traditions of Slow Death.

By the way, those comix traditions are nicely remembered in Jon B. Cooke’s opening Intro and long, informative history of the comic—Last Gasp’s first—which ran intermittently between 1970 and 1992.

Underground comix have sadly become a footnote to today’s collectors, who seem to think they were all about sex and violence if they think of them at all. But Slow Death was always about wanting to make a difference, no matter how small, wanting to make people think, and hopefully act. As disturbing as it is, I’m pleased to report that Slow Death Zero continues in that tradition.

Due out in March, you can pre-order copies at the Last Gasp site here: https://lastgasp.com