Booksteve Reviews: The History of EC Comics by Grant Geissman 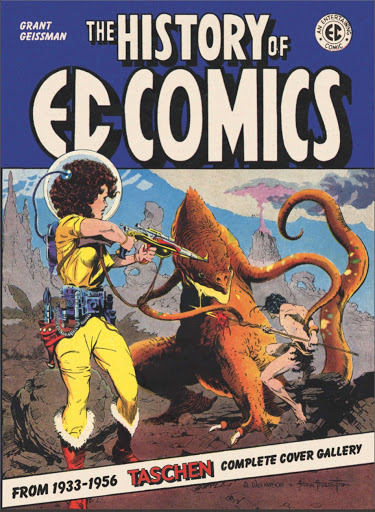 For the most part, EC Comics fans are and always have been some of the most organized, knowledgeable, creative, and downright nicest people I have ever run across in comics fandom. You know, pretty much the opposite of what was predicted by the late Dr. Wertham and those he so misguidedly stirred up back in the 1950s.

If you aren’t familiar with EC Comics, the 1950s publisher was known for its particularly grisly horror comics, its sleek, thought-provoking science fiction, its social justice tales, its anti-war stories, and, finally, its astonishingly influential humor comics.

For the first few years I collected comic books, I was completely ignorant of EC except for Mad and, as an elementary school student, I only occasionally saw an issue of that and had no idea of the folks behind it. I first saw the three ghoulunatics—The Old Witch, the Crypt Keeper, and the Vault Keeper, when they appeared for a few panels in an issue of Marvel’s Not Brand Echh in 1968. Had no idea who they were. I picked up a few of the later editions of the first Mad paperbacks, too, but had no idea exactly what I had.

Then I spotted the ads for Woody Gelman’s Horror Comics of the 1950s, forever revered by hardcore EC fans today as “The Big Book.” Only once did I ever see a copy in stores, though, and the dust jacket was badly torn so I didn’t buy it.

My real introduction to EC Comics came when I discovered comics fandom. Alan Light’s Flashback was first, with several Wallace Wood science fiction stories reproduced in murky black and white scans from the original comics. Then I mailordered a copy of the program book for the one and only EC Convention because it had a fun and naughty cover, also by Wallace Wood, an artist whose work I already knew from Marvel, DC, and Tower Comics. The con book also had a well-chosen selection of reprints in the back. From there, things moved rapidly, as the Tales from the Crypt and Vault of Horror movies came out and articles about EC popped up with regularity in fandom and even in “real” newspapers. I learned of Dr. Fredric Wertham and his long-standing anti-comics movement. I even read a copy of Seduction of the Innocent via inter-library loan. (Didn’t believe a word of it!) I was a charter subscriber to the short-lived East Coast Comix project, which reprinted vintage EC issues in full and in color but with new text pages. Other EC-related fan projects were everywhere by the late 1970s, many of them from Russ Cochran via his direct line to EC Publisher William M. Gaines. There was even a hardcover biography of Gaines himself that briefly flirted with the bestseller lists!

It was Cochran, though, who truly resurrected EC Comics, spending several decades in contextually reprinting every single horror, science fiction, humor, etc. story that EC had ever published in quality, annotated, slipcased hardcovers from Gaines’ preserved collection of all the original art.

All of which is a long-winded way of bringing us to today’s offering—an EC Comics fan’s wet dream—The History of EC Comics by Grant Geissman. Grant Geissman, you say? Sounds familiar. “Isn’t he a highly respected jazz guitarist?” Why, yes. Yes, he is. But he’s also highly respected as an EC Comics historian, having previously written or co-written more than a half dozen other books on EC and Mad, all from major publishers.

This one is from Taschen, the German publisher that delights in putting out those amazing oversized art books dedicated to people, places, and things once thought not to deserve an amazing oversized art book. As with all Taschen books, this one offers beautiful design work. Comics being a visual medium, the entire book—about 600 pages—is perfectly designed to emphasize the colorful, visual history of EC Comics.

But the text isn’t lacking, either. Beginning well before the days of EC proper, Geissman walks us through the history of both M.C. Gaines and his son William M. Gaines, two people who had some major issues with each other but each of whom played several important parts in the overall history of comic books.

We learn about All-American Comics and its connections to both DC and EC comics; we get the lowdown on Educational Comics and how it became Entertaining Comics; we revisit the infamous Congressional hearings on juvenile delinquency; we witness Mad becoming a cultural icon far and above its four-color beginnings.

It’s all here. One could argue that some sections could have used more detail but that, of course, would make this huge book even bigger. The story of Mad could undoubtedly fill a volume this thick all on its own. No, Grant wisely gives us the big picture without getting bogged down in the smaller details. All the necessary points are there and all the major players are present and accounted for: Gaines, Feldstein, Kurtzman, Craig, Wood, Orlando, Evans, Ingels, Kamen, Krigstein, Davis, the Severins, Elder, Williamson, Torres, Krenkel, Frazetta, Ray Bradbury, and even the ever-fascinating Lyle Stuart. (There’s a man who deserves a book just about him. Is there one?)

There’s not a naked page to be found. Every single one here is adorned with art, photos, or rare letters and documents, a large number of which were completely new to me, and all of which are annotated. Many well-known EC covers are printed in giant size, along with lots of original art, all with some of the best reproduction I’ve ever encountered. (The famous splash for “Food for Thought” by Williamson and Krenkel and friends looks astonishing!) A few seminal stories are reprinted in full including the quite literally legendary “Master Race” by Feldstein and Krigstein and “My World,” by Feldstein and Wood. 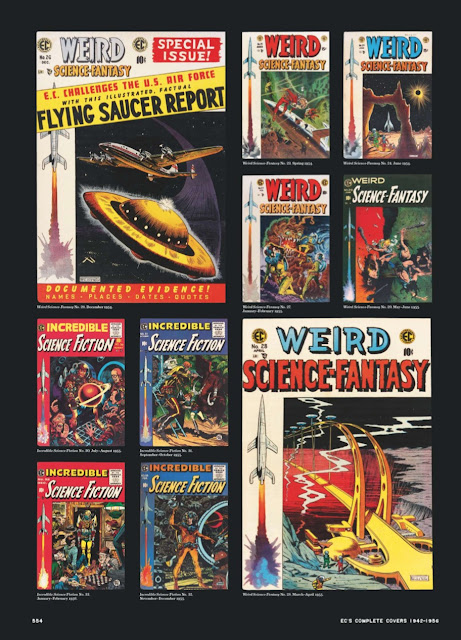 One of my favorite sections is the 75-page section at the back that shows the cover of every single comic book that could be called an original EC, in order by title and then number. Even the magazine version of Mad is covered up through issue 35. (Yes, I know the Grand Comics Database has all that, too, but here there’s no having to bounce between web pages and the images are much bigger!)

Sounds too good to be true, you say? Well, inevitably, any book of this size will contain errors. In this particular case, I found two. Choke! Gasp! Exactly two. Just…two. There may or may not be a few others but nothing else jumped out at me. That there were only two relatively minor errors that made it into a book this size is actually quite remarkable. And neither were really about EC. When it comes to the EC stuff, the man really knows what he’s talking about!

What were those errors? Nope. I’m not gonna be that guy who reads hundreds of pages of greatness and then dwells on two errors. I’m here to celebrate this book! Ultimately, it comes across like the biggest and best darn EC fanzine ever! In the end, there wasn’t much information in it that I didn’t already know but to have it all in the same place like this, to view it all in perspective and in order, felt just amazing.

If you’re a newcomer to EC, it goes without saying that this would be an excellent, if cost-prohibitive, jumping on point. If you’re one of those organized, knowledgeable, creative, and nice EC collectors I mentioned above, what are you waiting for? Sell your lesser-grade duplicates of Panic and Saddle Romances on eBay so you can afford to buy a copy of Grant Geissman’s The History of EC Comics.