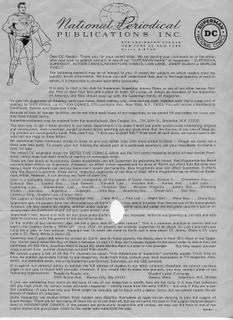 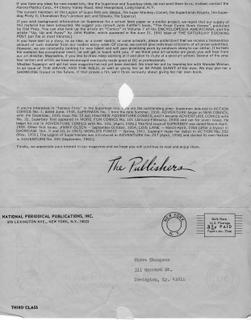 When's the last time you saw one of these? Surely thousands were sent out in response to letters to DC in the 1960's but other than the few I retained, I've never seen another. Marvel Comics, who chose to ignore every letter I ever sent them ,reportedly sent out empty envelopes to "no-prize" (get it?) winners while DC apparently sent out what amounts to FAQ sheets to every correspondent. My first letter was written to GREEN LANTERN in 1966 and while it was never published, I was delighted to recieve the above response in the mail a few months after I wrote it. My first published letter finally appeared in a 1968 ADVENTURE with all but a couple lines edited out. Still, you always remember your first. To this day, when traveling, I'll annoy comic shop owners by grabbing a back issue and pointing out my letter!

Oh, by the way, I don't live at that address anymore but I did recently take my 8 year old son there and take a picture of him sitting on the porch just like I did when I was his age. Ah, nostalgia!