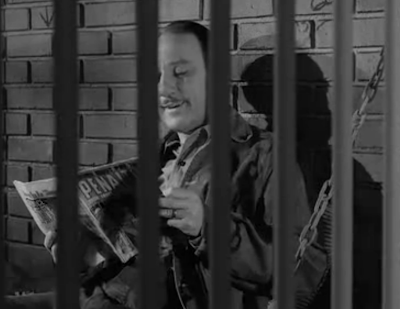 In 1963, Raymond Burr, TV's PERRY MASON, had to miss a few episodes (other than cameo inserts) due to illness. One of the people who took up the slack on the series as guest lawyer was the great Bette Davis. I had heard about her episode for ages but had never seen it until the other day. That's where I also caught this.

In the episode, her client is Michael Parks. Parks is seen in jail early on talking, he thinks, to actor Dick Wilson as the inmate in the next cell over. Only Wilson is ignoring him, choosing instead to read a comic book!

Here's what I wrote when I posted this on Facebook:


CRIME MUST PAY THE PENALTY was a comic book that ran from 1948 until 1946. Can't tell which issue this is but I spotted Dick Wilson (Mr. Whipple!) reading it behind bars in a 1963 episode of PERRY MASON. Seven years after the fact and with no such thing as a comic book shop, the producers probably went a long way to find a copy just for the irony.


Usually in the old shows if someone was seen reading a comic or a magazine, they'd go out of their way NOT to reveal what it was. In this case they were obviously going for the joke and, as I say, had to go a long way for the 5 seconds or so the comic is seen onscreen.

Posted by Booksteve at 1:14 AM