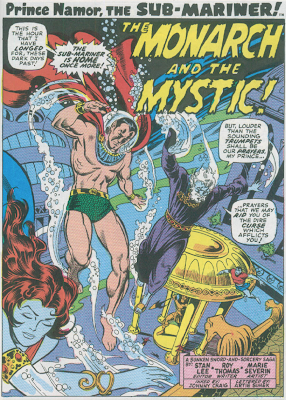 If this one looks familiar, it's because it's actually quite similar to one from just a few issues back, also by Marie Severin. The angle, Namor the descent and even the yellow gazebo thing (although not an exact copy) are the same in both.
The only real differences are Subby's cape and his (don't ask) helmet, along with the other two characters.
Visually, it's okay but nowhere near as interesting as some of the recent issues have been.
This issue is contextually important as, along with an issue of THE INCREDIBLE HULK around that same time, it featured a guest appearance by the then-recently bookless Doctor Strange, this setting the stage for Roy's eventual teaming of those three unlikely characters as the "non-team," the Defenders.
Posted by Booksteve at 12:09 AM