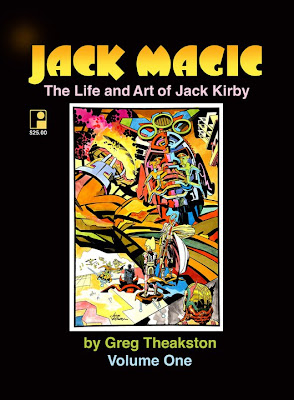 By way of full disclosure JACK MAGIC is a book I worked on BUT...I came into it after the text was already written. I did proofreading, spelling/grammar corrections and some after-the-fact fact checking. All the good stuff was done by author Greg Theakston!
No stranger to books on comics legend Jack Kirby, Theakston has published a number of them since the early eighties, mostly collections of art or essays or interviews or just plain old appreciations. This, though, is the first volume of a biography of the man who would become the King of Comics.
Taking tough street kid Jacob Kurtzberg from his inner city childhood in the early part of the 20th Century to his teaming with Stan Lee at the beginning of the Marvel Age, JACK MAGIC succeeds nicely in showing likely influences on many levels. His father being a weak man, the feisty youngster grew up with a constant need of an adult male to look out for him, a role that eventually fit fellow artist Joe Simon to a T and led to a long and fruitful friendship and partnership.
Theakston has gleaned much of his info from extensively quoted conversations with Jack, himself, as well as quotes from many others involved in his life and career. Artistically, there is a considerable selection of photos I had never seen before as well as covers, panels and other illustrations, some reproduced from the original art. Each stop along the way details Jack's successes and failures at various companies. The most riveting and telling sections of the book deal with the King's war service and are presented largely in his own words.
Although at times controversial for various reasons, Greg Theakston knew and worked with Jack Kirby for a number of years in a number of capacities. As a Kirby fan for 45 years, I've devoured THE JACK KIRBY COLLECTOR for years as well as Mark Evanier's recent art book and any and all Kirby interviews, collections and treasuries I ever saw...and JACK MAGIC, VOL. 1 still managed to give me a whole new perspective on the man and his work. If you're a comics fan over the age of 30, you're probably a Kirby fan, yourself. The rest of you, it's about time you discovered why comics exist. Jack. He was magic!
Can't find it on Amazon but you can get a copy here:http://www.lastgasp.com/d/37897/
Posted by Booksteve at 12:16 AM