Review: If You're Cracked, You're Happy! 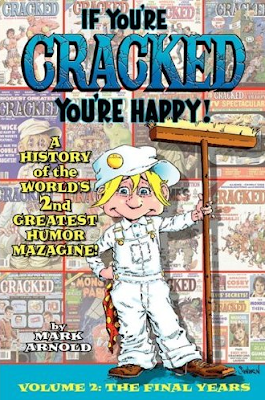 CRACKED.COM is one of the funniest sites on the 'Net these days with its bizarre lists and irreverent reviews. Outside of the vaguest connection to the name and the logo, CRACKED.COM has absolutely no relation, however, to CRACKED, the magazine which never really came anywhere near that type of popularity.
What's that you say? You didn't know CRACKED ever WAS a magazine? Sigh. CRACKED was the Rodney Dangerfield of humor mags, the Avis of humor mags, the nearly forgotten survivor of the scores of MAD rivals that began--and mostly ended--in the 1950's.
As a humor magazine, CRACKED lasted nearly half a century and yet somehow still remained under the radar, a guilty pleasure for those who liked the art of John Severin, Bill Ward, Gray Morrow and others.
Author Mark Arnold, a man after my own heart, understands that sometimes reading about something is more interesting than reading the something itself. Thus, he has written IF YOU'RE CRACKED, YOU'RE HAPPY--not one but TWO illustrated books detailing the history and office politics of the mag as well as offering a mind-numbingly complete checklist for those few readers who happen to have complete collections!
There are a few attempts at being funny here such as the non-Foreword by--or not by--none other than Steve Ditko or the blacked out Don Martin art where the artist's estate apparently balked at giving permission. For the most part, though, this is the tale of a business as told by some of the people who ran it and some of the folks who worked there. As with any office, not everyone will like everybody else so various names are both praised and vilified throughout.
One name that comes out relatively unscathed is that of Mort Todd aka Michael Delle-Femine. In fact, the funniest part of the books to me is the intermixing of his names (along with occasionally a few other pen names) and the seeming constant need to explain that the two were one and the same. That said, Todd comes across as an extreme creative force at a mag where following the well worn paths others started tended to be the norm. Although management, he worked tirelessly for creators' rights and thus managed to bring some very talented new blood to the show for one last burst of minor success on the stands.
Before Todd, CRACKED started out not only as a MAD imitation but with MAD contributors including Will Elder and Jack Davis. George Gladir, known also for his long-running (and still ongoing!) stint at Archie Comics was probably the best and best known writer. Former MAD artist John Severin made CRACKED his home for decades and his art, in turn, identified the magazine. Former BLACKHAWK artist Bill Ward, best known for his Golden Age "Good Girl Art" strip TORCHY and a zillion later (and often much more explicit) variations on same, was also a mainstay under both his own name and as "Bill McCartney."
Later, post-Todd versions of the mag included one edited by Rick Nielsen, the Huntz Hall guitarist from Cheap Trick. Another attempted to ape MAXIM as a humor mag.
Arnold's prose is fairly straightforward allowing the many interviewees to speak for themselves. As in real-life, sometimes those memories conflict. There's some cutthroat business moves and some diva creators, some lingering issues and some catty gossip. Fun stuff!
The tough part about recommending IF YOU'RE CRACKED YOU'RE HAPPY is its packaging. With a nearly 50 year checklist including absolutely tons of specials and recycled collections of reprints making the tome weigh in at more than a thousand pages, the book was cut in half. Each simultaneously published volume, therefore, contains only part of the story and part of the checklist! A bit too much both in concept and in price for the casual fan and yet were there ever really any CRACKED fans who were anything more than casual? Were there ever rabid CRACKED fans? It's a fun read and a story that deserved to be told. Arnold tells it as only an obsessively curious completist could tell it. After reading this book, I couldn't resist contacting Mort Todd and saying if he ever again found himself working on a mag I wanted to work for him! In the end, I have to recommend IF YOU'RE CRACKED, YOU'RE HAPPY as an important contribution to any pop culture book collection. That said, I just wish there had been some better way to put it together and get it out there.

Posted by Booksteve at 9:30 AM