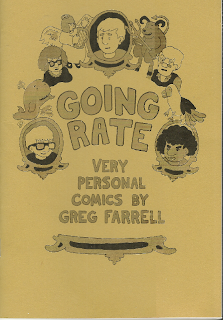 The autobiographical comic book as we know it today can be dated back to Justin Green's intensely personal BINKY BROWN MEETS THE HOLY VIRGIN MARY from 1972. In the last couple of decades, the genre has flourished with the rise of desktop publishing and many such titles have gone on to great acclaim. TIME actually and remarkably named Alison Bechdel's autobiographical graphic novel FUN HOME: A FAMILY TRAGICOMIC as the Book of the Year in 2006!

That said, these types of comics have never been favorites of mine.

But sometimes I can relate. GOING RATE is a new small press collection of "Very Personal Comics" by Greg Farrell published by Seize Books. It's largely about nostalgia. Not necessarily MY nostalgia and yet the feelings are universal enough that they come across quite genuinely in the book. 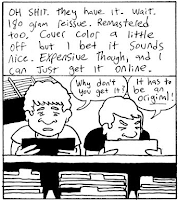 The stories are varied and cover everything from body odor and childhood pets to marijuana and delicatessens. My particular favorite is the first in the book, "White Whale of the Bay," in which our hero searches vainly for a particular vinyl LP for years before finally finding it long after he's given up! Been there, done that. The settings were different, the type of music was different but the feelings were the same.

And that's what this anthology is all about really--feelings. Farrell as writer (with a little help on a  couple stories it says) confronts head on his feelings of loss as time moves on, his feelings that places and things that are special aren't there any more…or won't be soon.

All of this is given extra depth by Greg's deceptively simplistic art. He can show more depth in the way he draws eyebrows than some illustrators can using a much broader bag of tricks. It's black and white art with some use of grey screens and it's clear that some stories had more time spent on them than others but his general style is quickly ingratiating and perfectly fits the subjects. 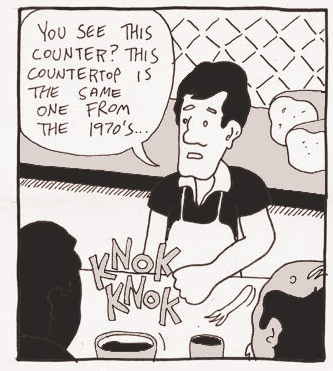 Speaking as someone who posted two years worth of very personal thoughts, feelings and actions of my teenage self online, I can tell you for a fact it's a very liberating thing. You not only let others in very deeply into your world but you also learn a little--or in some cases a lot--about yourself. It's better than therapy.

I've never met Greg Farrell but I feel like I know a lot about him and I like him. Like me, he longs for the good stuff to stay just a little bit longer. If you're one of the millions of adults--and this IS adult material--who enjoy these types of autobiographical comic books, I think you'd enjoy this one. If you've never tried one, this would be the perfect place to start.

Booksteve Recommends! You can order a copy here: http://yoburbalino.blogspot.com/p/books.html