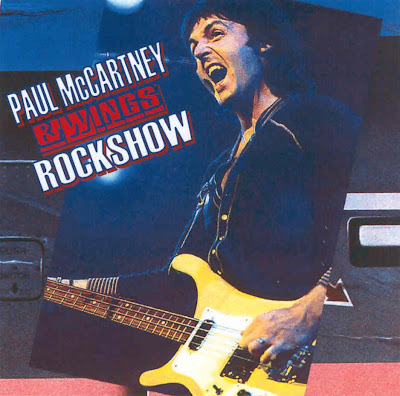 2011 saw reissues of Paul McCartney's albums, McCARTNEY from 1970 and McCARTNEY II from 1980. What many folks seem to forget and other, younger fans just don't seem to be aware of, in between those two albums, Paul McCartney had Wings!
McCartney's biggest weakness as a songwriter is that his songs seem to be patchwork suites comprised of various unfinished songs. In the Beatles, this served him well as those songs, at least early on, were finished by John Lennon. As a solo songwriter, various Wings hits like UNCLE ALBERT/ADMIRAL HALSEY , BAND ON THE RUN and JET come from that same mold. The Wings albums, though, are littered with instrumentals that go nowhere and song fragments that could have used more thought, more work and more creative effort. The group also had an odd tendency to put out singles that did not appear on albums. This led to the US shoehorning the hit single HELEN WHEELS onto the BAND ON THE RUN album. Songs like SALLY G were on the charts but only as 45's. MULL OF KINTYRE, Wings' greatest hit and one of the biggest hit records of all time in the UK remained an orphan until WINGS' GREATEST.
After Paul's embarrassing drug bust in Japan as Wings arrived for a series of concerts in early 1980, the group broke up. There was no formal announcement and Wings songs continued to be released from time to time. 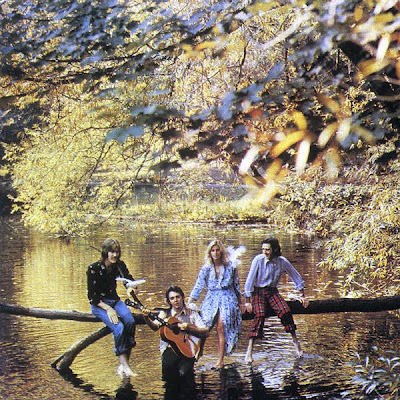 Released in late 1971 after 1970's solo McCARTNEY and May's RAM, credited to Paul and Linda McCartney, WILD LIFE was, to put it mildly, a major disappointment. Paul's new, post-Beatles band at that point consisted of his wife Linda, so often derided for her lack of musical ability, session drummer Denny Seiwell and Denny Laine who had been the frontman for the Moody Blues six years earlier. Not a single song on the album was memorable in any way. Perhaps based on his name alone, although neither it nor "Wings" even appears on the album cover, WILD LIFE mad it to # 10 on the US charts. In spite of that, one wondered what had happened to the young man whose every song turned to gold. 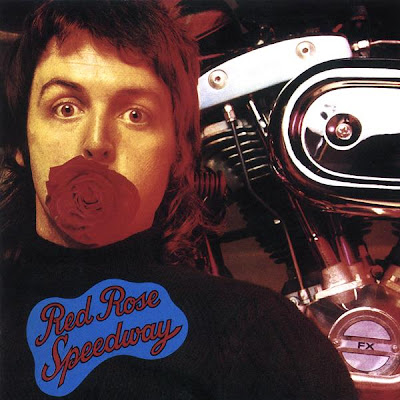 RED ROSE SPEEDWAY was originally intended as a double album until someone came to their senses. The addition of lead guitarist Henry McCullough, late of the Grease Band and Spooky Tooth, added some much needed oomph to Wings and the group spent a year touring and honing their stage presence. This album, released in mid-1973, had the added benefit of the JAMES PAUL McCARTNEY TV special which highlighted several songs from it as well as the group's biggest hit single to date, LIVE AND LET DIE.
Even cutting it down to a single disk, lot of the songs on RED ROSE SPEEDWAY are throwaways. BIG BARN BED was performed in a much livelier version on the aforementioned TV special. Although the songs here are more melodic and much in the tradition of the McCartney of yore, they still aren't great songs...or actual songs even in the case of the album's closer, yet another medley of song fragments. I really like it actually...but it's not a song. Then there's things like the dreadful instrumental, LOUP (FIRST INDIAN IN THE MOON). Paul was clearly wanting ti be creative but not quite getting there.
What saved the album and arguably Wings' career was MY LOVE, one of Paul's patented silly love songs written in tribute to his missus, Linda. Although schmaltzy to the extreme, it became a huge hit and put Wings on the radar for millions worldwide. 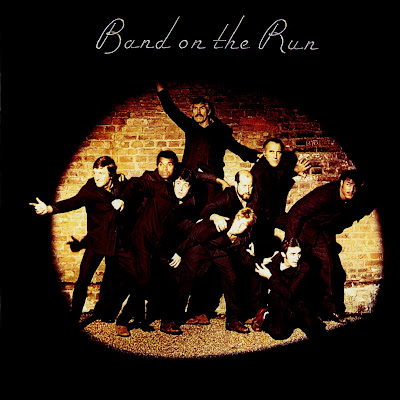 This soon to be iconic cover--note they still weren't even listing the band--featured Christopher Lee, Clement Freud, James Coburn and other celebs for no apparent reason. According to legend, Paul insisted they record at some exotic studio and decided on Lagos, Nigeria. Seiwell and McCullough both chose to leave the group before departure. Paul and Linda were reportedly nearly killed by bandits who stole all the original recordings at one point so they had to start from scratch!
Ostensibly a loosely knit concept album, parts are actually leftover bits from what would have been an animated cartoon Paul wanted to do about Sailor Sam. Other than that, there really is nothing to tie the songs together.
The title tune, itself another catchy mish-mash of song fragments, is followed by JET, unquestionably one of Wings' best rockers and still a crowd-pleaser today. The rest of the songs are all competent and listenable if not hummable. One of the best, NINETEEN HUNDRED AND EIGHTY FIVE (with its pointless BAND ON THE RUN fadeout), was largely forgotten until Paul revived it on tour in recent years to great acclaim!
At its release, critics adored BAND ON THE RUN and "Paul is Back!" was heard throughout the land. The title song would even go on to win a Best Pop Vocal Grammy! BAND ON THE RUN topped the charts off an don for ages in both the UK and the US throughout 1974. 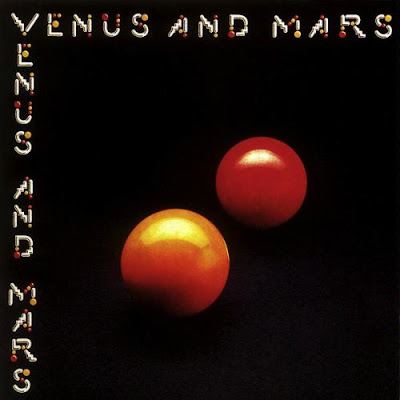 By the time VENUS AND MARS came out, there was a huge aura of anticipation that had never been there for a Wings album before. I remember listening to the album in its entirety on the radio late one night before it even hit the racks at the record stores!
New lead guitarist Jimmy McCulloch, formerly with Thunderclap Newman, is said to have clashed with new drummer Geoff Britton from the first and after a few months and too few actual recording sessions, the latter left to be replaced by American Joe English, later a Christian performer.
In yet another effort at an unnecessary linking bit, the title song appears in part on side one, leading into the crowd-pleasing ROCKSHOW and in part on side two. In a nod to his continuing insistence that Wings was more than just a backing group, both Laine and McCulloch were given a lead vocal. The hit single was actually on the album this time, the bouncy LISTEN TO WHAT THE MAN SAID.
Released in mid-1975, the revised Wings then set off on a tour they called WINGS OVER THE WORLD. 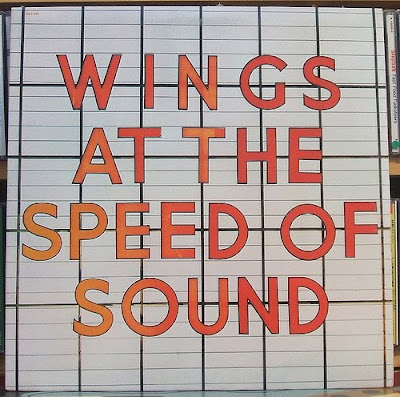 Recorded while the band was hot off the road, WINGS AT THE SPEED OF SOUND finally gave the band credit on an album cover and was probably the most diverse album they came out with. Critics were initially less than enthused but the album and its subsequent singles, SILLY LOVE SONGS and LET 'EM IN, topped the charts everywhere. The former would end up the most popular single of the year in the US after a couple of separate stays at number one. 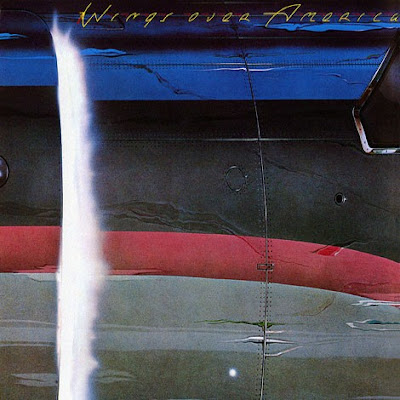 In the summer of 1976, ten years after the Beatles final live concert at Candlestick Park (and no, you don't count the Apple rooftop), Paul McCartney finally conquered America all over again. WINGS OVER AMERICA came out at the end of the Bicentennial year and was made up of individual tracks from the various tour concerts. HEY JUDE is, I've read, from his Cincinnati stop so if you listen real, real closely you might actually hear me singing along in the ending! This was the first time Paul had agreed, on a limited basis, to sing Beatles hits in public in a decade. By this point, he had the band so polished that their live act was perhaps a surprise to many critics--and Paul had many in the seventies. 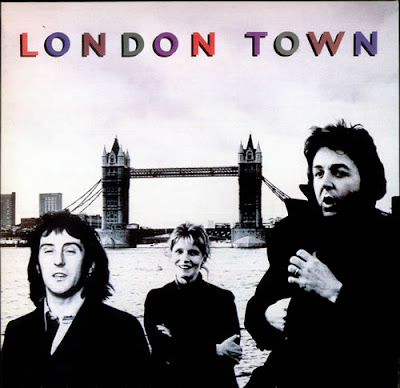 Sadly, the band broke up again as McCulloch and English left (the former after an alleged drug-fueled incident where he attempted to murder Paul and Linda. Soon enough he would die from an overdose). Even though they played on some tracks of LONDON TOWN, they were no longer considered part of the group. Denny Laine, however, was given a much more prominent role on this album with several good vocals and Laine-written songs! Although my favorite Wings album overall, the hit single, WITH A LITTLE LUCK, is actually my least favorite song. Released in 1978, MULL OF KINTYRE was recorded during the same sessions and released , oddly enough, as the B side to a totally forgotten rocker made up from the titles of adult films, GIRL'S SCHOOL. It would have to wait for the next release to appear on an LP. 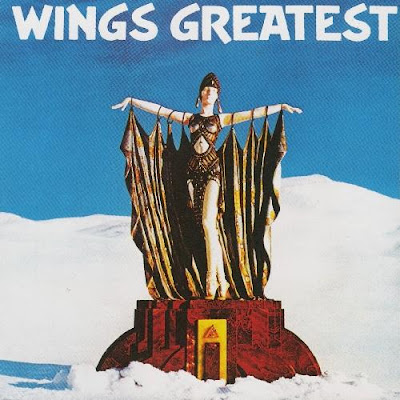 WINGS GREATEST was exactly that, the first in a long line of collections of post-Beatle McCartney releases.The inclusion of MULL OF KINTYRE no doubt confused many American fans who had never heard of the song. Nevertheless, this compilation was yet another huge success. 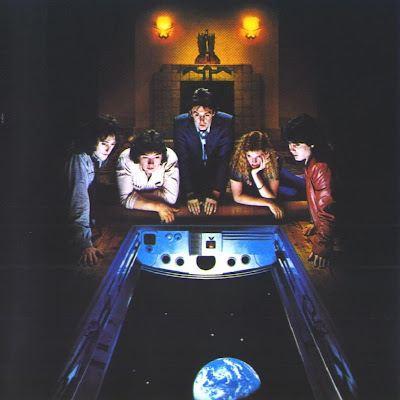 Back to the completely wordless covers with BACK TO THE EGG, another strong collection of songs, now featuring lead guitarist Lawrence Juber and drummer Steve Holly along with the ever-reliable Denny Laine. Strangely, there were no hit singles but Wings did a mini-TV special which was actually a compilation of videos related to the album. BACK TO THE EGG made it to number 8 on the US album charts. Wings then appeared at the Concerts for Kampuchea and at the end of the year gave a memorable concert at Glasgow. Then they prepared to head off to Japan for a tour that would eventually make its way to the US...or at least that was the intention. 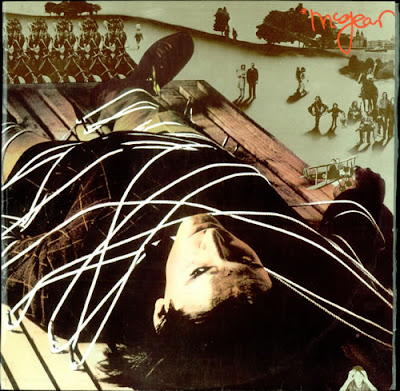 Not technically Wings albums, both Mike McCartney's MCGEAR album and Denny's HOLLY DAYS have both been described as Wings albums with better vocalists...and better material than the real thing! The original line-up backed McCartney's talented brother on his LP with Paul contributing songs and vocals as well as producing. Denny's album is all Buddy Holly covers, with Paul and Linda joining in on vocals and instrumentation (and Paul actually owning the rights to all of Buddy's catalog). 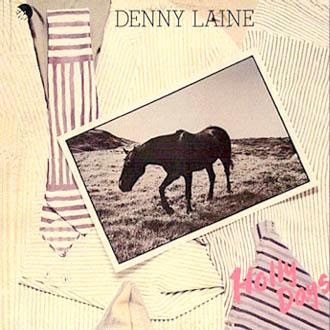 After Paul was released from jail in Japan, the next record release was a hit single of a song off his upcoming McCARTNEY II album...only COMING UP was actually a live cut from the Glasgow concert by Wings.
In the CD years, most of the once single only releases have been issued as bonus tracks on the various Wings CDS with promises of much more to come as the group's catalog is reissued over the next few years in multi-CD sets.
Posted by Booksteve at 7:09 PM