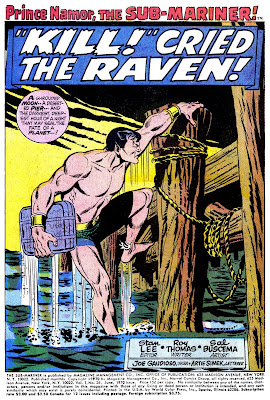 This issue of SUB-MARINER from 1970 features a second attempt at reviving an obscure 1940 Timely character called the Red Raven. A previous attempt in X-MEN was also by Golden-Age loving Roy Thomas.

The Raven only appears here on the splash in the title box, however, itself perhaps a little too big. What I like about Namor though is that he looks a bit wet! A zillion times he comes out of the water in comics looking pretty darn dry. Even here he looks pretty dry other than his tousled hair.

Nicely laid out, drawn and colored with Sal Buscema and Mr. "Gaudioso" continuing on the art.
Posted by Booksteve at 12:07 AM