Martin and Lewis in Northern Kentucky-1947 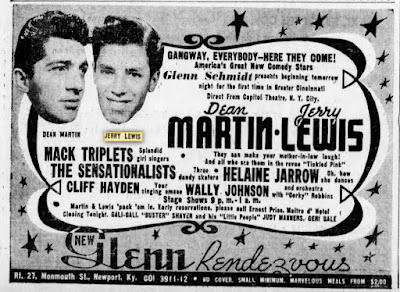 Here's an ad for Dean and Jerry appearing in Newport, KY several years prior to their first TV and film appearances. Below is, in fact, an ad where Jerry was appearing pre-Dean at another once prominent Northern KY location. Both of these fine establishments are said to have been mob-tied. The Lookout House burned down at one point, was rebuilt and then later burned down again.