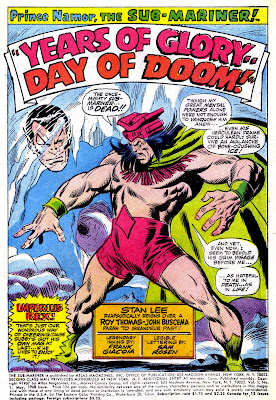 Here we start a new feature. This one a brief weekly look at Marvel's SUB-MARINER comic of the sixties and seventies, appropriately enough through its "splash" pages. I've always been fascinated by Prince Namor even though I can't swim. I first met him in his TALES TO ASTONISH strip in the mid-sixties, then backtracked to find him as a villain in FANTASTIC FOUR and AVENGERS. Soon enough, I latched onto his Golden Age reprints. In 1968's Marvel expansion, Subby, as he is affectionately called, got his own comic again. It ran 72 issues but was decidedly a second-string book. Doesn't mean it didn't have it's moments, though. Let's just jump in, shall we? It's 1968 and Namor is about to meet...his Destiny!
This first issue splash page shows the at-this-point oval-headed sea king (it varied throughout the run) as only a vague thought in the obviously angry mind of the character Destiny whom in that issue we find has much to do with Namor's past. As drawn by John Buscema and Frank Giacoia here, Destiny would be quite an imposing figure...if he didn't look like a big naked crybaby wearing a pink diaper! And the green! What is with that color scheme, boy? Plus he's clearly in an ice cave! He must be awfully cold unless he comes with the power of "super warmth." Note his funny-looking, oddly shaped helmet, also. It's that helmet, in fact, that will become a major thorn in the side of various Marvel superheroes over the years since as...The Helmet of Destiny!
Posted by Booksteve at 1:37 PM