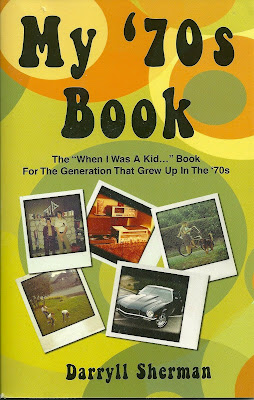 Memory is a weird and wonderful gift...but a treacherous one. I recently became reacquainted with a friend from my teenage years. We sat around remembering the good old days...only his memories didn't always jibe with mine. I was so SURE of mine, however. He, too, was so sure of his.
Darryll Sherman has a lot of memories of that same era, many of which I actually had forgotten until his book. Some of his are different than mine and at least one is a bit off. MY '70'S BOOK is a short, fun read, though, for anyone who lived through the late sixties and the seventies--a reminder of what we sacrificed and lost, either willingly or unwillingly, to get our home theaters and IPhones.
Some of the topics didn't personally apply to me but nonetheless triggered memories of long-forgotten friends and neighbors. I didn't bike, for example. Never had one and to this day have never ridden a bicycle. I do recall neighborhood kids who were really into it with baseball cards flapping in their tires. We never took long car trips. We never got the Sears Wish Book, I never had Legos...but it's fun and a little sad to see what I missed out on.
My favorite part of Darryll's book (and I call him by his first name because his warm writing style easily makes one feel an old friend) is about the way we played. My son, now fourteen, has only once ever spent the night at a friend's home, has never been out after dark alone and has rarely had friends over. He has spent little of his life outdoors.
By contrast, even being the bookish child that I was, I lived to be outside. When I was about ten, I would burst through that screen door and not be seen again 'til well after dark on most nights! I had some friends whose faces I never saw in the daytime! I wouldn't have recognized them. We would run through the alleys and play down on the riverfront and never thought twice about it. Nor did our parents. Ah, memories.
As you might expect, there's a good deal of memory-jogging mentions of music, movie and TV heroes of the period. Also lots of toys, TV commercials, cars and even some old-fashioned home cooking! And Jarts! We had Jarts! We loved Jarts and we all survived! (Still have 'em somewhere.)
Toward the back there's a delightful "When I was your age..." section you can share with your own young whippersnappers. This is where we find the one glaring error that Darryll's memory makes! He makes reference to "The Oscar Meyer Wiener Song" as having the lyrics, "Fat kids, skinny kids, kid who climb on rocks. Tough kids, sissy kids, even kids with chicken pox..." Darryll...finish that last line. "...Even kids with chicken pox love hot dogs. ARMOUR HOT DOGS! The dogs kids love to bite!" Armour, not Oscar Meyer! By the way, that song was revived many years later with updated lyrics, replacing "fat kids, skinny kids" with "big kids, little kids."
This is the kind of book you share with your spouse or your old friends or, as I said before, your own kids. Force them to...I mean, let them see how it was when we were growing up. I have what's been called a spooky memory. I remember more than most people do from the old days. MY '70'S BOOK managed to pull off the impressive feat of reminding me of literally dozens of things that even I had forgotten. How many do YOU remember? Order your copy below and find out for yourself.
Posted by Booksteve at 1:26 PM