Movies That Fell Through the Cracks # 66 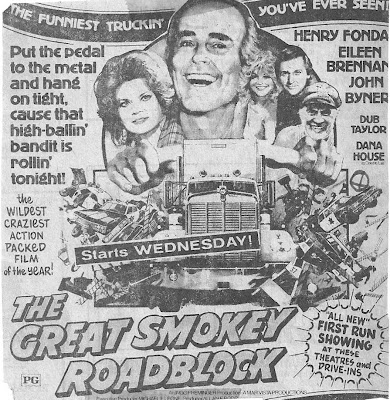 You can see by the ad that 1977's THE GREAT SMOKEY ROADBLOCK was clearly a good ol' boy comedy road picture along the lines of Burt Reynolds' then-box office topping flicks like SMOKEY AND THE BANDIT. Only it isn't. Well...parts of it are...kinda. In fact the main problem with this picture, also released and later shown on TV as ELEGANT JOHN AND THE LADIES, is that it doesn't know what it wants to be.
The plot is essentially the story of an old man put out to pasture who wants one last meaningful run in his designer truck and agrees to run a cargo of prostitutes across the country.
Plotwise, far too many serious parts get in the way of the promised wild and crazy comedy but much of that is made up for by quite an impressive cast.
Toplined is Henry Fonda, arguably one of the top 5 male film stars of all time. Although long past his prime he still alternated character roles with leads in prestige stage and TV productions. This was his first leading film role since 1973's Italian western, MY NAME IS NOBODY, which teamed him with Terence Hill.
The rest of the cast is a mix of veterans and newcomers. The former include Bibi Osterwald, Dub Taylor and Austin Pendleton. The latter contingent includes the pre-Freddy Kreuger Robert Englund, a post ROCKY HORROR PICTURE SHOW Susan Sarandon and a pre-WKRP Gary Sandy.
All things considered, when you take into account that this was the first writing and (only) directing credit for 25 year old John Leone, from a family of producers and distributors, THE LAST OF THE COWBOYS (yet another of it's names), is best described more as flawed than bad.
Posted by Booksteve at 4:28 PM