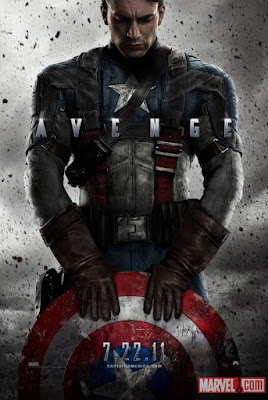 Seriously. This is the best they could do to entice the average filmgoer who doesn't know Cap from Batman? No mask/helmet. Are we really selling Chris Evans here over the character of Captain America...whose name isn't even mentioned except to plug the website? A scarred and scratched up shield, a brown, white and blue outfit. And the word..."Avenge." Avenge what, exactly? As a design it's well-made. As a marketing tool, this is virtually useless in my opinion.
I get the fact that Cap's origin is military-based. I really do. But does that mean that every single thing about the character anymore has to revolve around that? I mean, they practically have him carrying rations around with him along with his utility belt. Since when did Cap need a utility belt?? He's not Batman! What's that you say? Just trying to be realistic? IT'S A COMIC BOOK, YOU $%^&##@@!!! Not everything needs to be realistic! Cap was always an idealist who could be counted on for three things--1) to seem out of place anywhere he was at and yet dominate any room, 2) to take charge of any situation whether asked to do so or not and 3) to be able to make a damn good speech on any subject at the drop of a hat and with no speechwriters whatsoever! All I'm seeing in that poster up there is a good soldier. I appreciate soldiers and someone should make more positive films about them...but THIS was supposed to be the CAPTAIN AMERICA that makes up for Reb Brown's motorcycle helmet and Matt Salinger's rubber ears. If they don't get it right this time, will there ever be another chance?
Posted by Booksteve at 5:23 PM