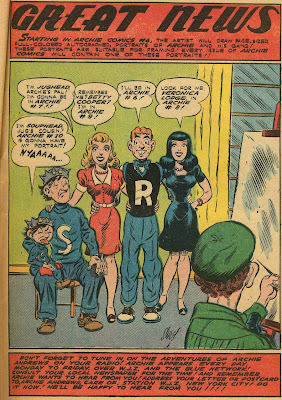 This one did NOT make it into Craig Yoe's upcoming ARCHIE book (so you can imagine the cool stuff that DID!) but I like it. While the characters look off model to the modern eye, they weren't for the day. Jughead' s speech bubble looks as though it may have been an afterthought--perhaps Souphead was meant to be promoting Jug's portrait along with his own. Betty looks the most different obviously but still wholesome and wonderful! Veronica, on the other hand, reminds me of Bettie Page--even though the iconic Ms. Page wasn't even a blip on the radar yet at this early stage. Maybe she copied Veronica's hairstyle when she came along?? As for Arch, he could really use some dental work. The art here is by Harry Sahle, though, an MLJ staple and one of Archie's regular artists of the day.
Note also the plug for the gang's radio series!
Posted by Booksteve at 6:30 PM