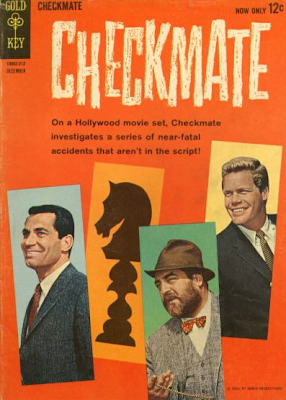 CHECKMATE was not a classic TV series nor is it, in fact, remembered much at all today, even though it's out there on the web and on dvd. That said, CHECKMATE has aged better than some shows that ARE considered classics...and we can probably thank Jack Benny for that.
Like a number of other stars (most notably Bing Crosby and Lucille Ball), Benny was convinced that his production company should create other TV series and CHECKMATE was the most prominent result. According to reports, the CBS network wasn't really sold on the concept but picked up the series to appease its biggest male comedy star.
The concept was created by best-selling novelist Eric Ambler. Originally intended to be a show about an elite San Francisco detective agency run by a man, his girlfriend and her Professor father, the girlfriend character was replaced before shooting began by young male contract player Doug McClure, thus leaving the Professor character no real reason to be there so he was re-written to be a consultant only. Ambler, unhappy with the changes, pulled out completely, although his credit would remain for all episodes.
Anthony George--one of the stiffest actors of the period--left THE UNTOUCHABLES to take the lead and McClure added his youth and trademark charisma to the project. The Professor was Sebastian Cabot, a little-known actor at that point but one already carrying the ingratiating intellectual gravitas that he would later bring to his long-running role as butler Giles French on FAMILY AFFAIR.
CHECKMATE ran two seasons and a hallmark of the show was to present a major guest star almost every episode. Thus one has Walter Pidgeon, Jane Wyman, Lee Marvin, George Sanders, Jack Benny, Anne Baxter, Peter Lorre and Ricardo Montalban. Like other shows of this period it's also fun to watch for actors who would become famous later as they pop up in small roles here--Mary Tyler Moore, Martin Landau and Harry Dean Stanton for example.
In spite of its regular cast, CHECKMATE was also what the TV TROPES AND IDIOMS site calls an "Adventure Town " series, 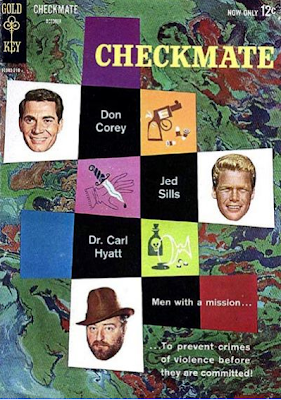 meaning that it often gives the appearance of an anthology series with the stars turning up barely or, in some cases, some of them not at all.
With a memorable theme and first season music by the now legendary John Williams, one script was even written by Leigh Brackett who would go on to write THE EMPIRE STRIKES BACK. Other big names who worked on some episodes included prolific movie and TV directors Ted Post and
Robert Florey.
George, an actor who would go on to a small but well-remembered role on the cult soap DARK SHADOWS, was a noticeable weak spot when put up against the high-powered performers who appeared week to week. After a while, its obvious that Sebastian Cabot's atypical detective/professor becomes the breakout character and he is given several episodes focusing on his character. McClure was always a welcome presence on TV and would go on to be so on 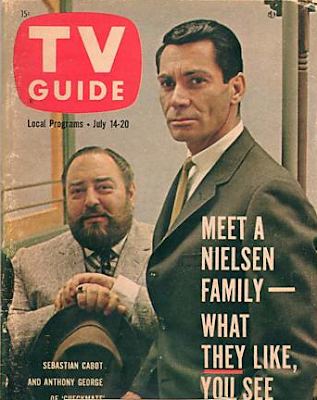 THE VIRGINIAN. SEARCH and BARBARY COAST. Here he was given some light comedy and much of the action sequences but held his own with the dramatic scenes, too. That said, for no apparent reason in season two, actor Jack Betts was brought in to carry a half dozen episodes as a cool, tough guy character. After a long career of character parts, Betts is the only member of the CHECKMATE crew still alive and working today.
The show was popular enough to get two issues of a God Key comic book tie-in but CBS had only reluctantly gone for a second season and there would be no third. If the series was ever shown in reruns, I don't recall it. Cabot and McClure soon moved on to what would be their signature roles. George went from leads to character parts to several long-running soap roles more suited to his acting style.

Posted by Booksteve at 5:55 PM