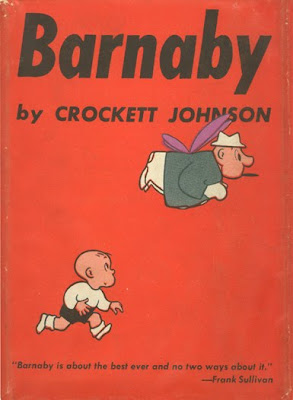 In recent years, in the wake of the "Complete" reprintings of PEANUTS, THE FAR SIDE, CALVIN & HOBBES, BLOOM COUNTY, DICK TRACY, etc....there has been a lot of talk about someone doing THE COMPLETE BARNABY. Judy-Lynn Del Rey tried it in the 1980's but the cheap paperback format made the delicate strip hard to follow. Only six volumes were released. COMICS REVUE later published some strips. Previously there had been reprint collections in the 1940's (including the one seen here which I found in a lonely corner of a used bookstore for ten dollars inthe late eighties) as well as some inexpensive Dover paperbacks that stayed in print for many years. But "complete?" No. Apparently...the time is now...finally! Fantagraphics today announced THE COMPLETE BARNABY to be designed by Dan Clowes!
BARNABY, in brief, was considered an "intellectual" comic strip and, as such, was a favorite of the intelligentsia including Ms. Dorothy Parker. It is never laugh out loud funny but, instead, whimsical in a way no strip ever was before or since. Created by Crockett Johnson whose claim to fame was actually assured by his HAROLD AND THE PURPLE CRAYON childrens books, BARNABY is essentially about a young lad's relationship with his clueless parents, his proud but ineffectual cigar-smoking fairy godfather, Mr. O'Malley, and their friends--including ghosts and a talking dog. There are few punchl 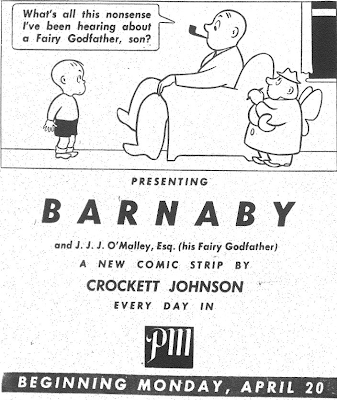 ines in the traditional sense. The strip's often topical humor comes from the situations and, eventually, the running gags.
One reason previous efforts to collect BARNABY have failed is that the project is uncommercial--it's little known today outside of historybooks, the characters aren't familiar, the humor is out of date, the style is old-fashioned....all true, sadly. Hopefully, Fantagraphics will persevere in their effort tis time to make it work!
Cushlamacree!
Posted by Booksteve at 12:36 PM