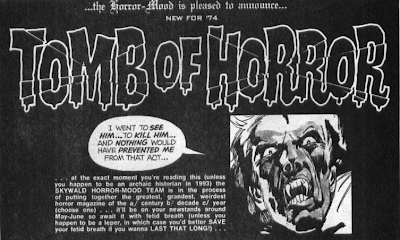 In the 1970's, Skywald published a series of horror magazines (as well as a few color comics) that proved to be worthy competition for Warren Publishing. PSYCHO, NIGHTMARE and SCREAM were pretty much equal to CREEPY, EERIE and VAMPIRELLA for awhile, often even utilizing some of the same creators. In 1974, they even announced a new magazine, designed to beat any and all that had come before--TOMB OF HORROR!! Unfortunately, the "Horror-Mood" had passed and TOMB OF HORROR never appeared. Much of the material intended for the new addition was instead used up in one of the final issues of NIGHTMARE before the whole line faded into comics history.
Posted by Booksteve at 2:40 PM