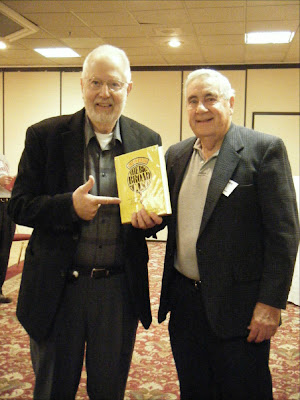 In a photo taken by Arlene Osborne, here we see reunited the writing team of Frank Buxton and Bill Owen who, in 1972, published THE BIG BROADCAST. A revised and expanded version of their early sixties volume, RADIO'S GOLDEN AGE, that second edition, coming as it did at the height of the oft-mentioned around here nostalgia boom, probably did more to turn people onto the joys of Old Time Radio than any team since Andy and the Kingfish.
From their own book, here is the "About the Author" section: Frank Buxton is a professional broadcaster who has been affiliated as a writer, producer, and/or director of such television classics as "The Odd Couple, Happy Days," and "Mork and Mindy". He was the original host of "Discovery" and performed in hundreds of television shows and feature films. Bill Owen was a major voice on ABC radio and TV for thirty years and was the principal voice of Superstation WWOR-TV.
And those impressive credentials leave out the fact that Mr. Buxton was also the voice of BATFINK in mid-sixties TV cartoons as well as most of the non-Woody voices in Woody Allen's re-dubbed Japanese spy flick, WHAT'S UP TIGER LILY? and the creator of the memorable seventies kids show, HOT DOG.
Thanks to both of these gentlemen for being an early influence on my own love of radio and to Mr. Buxton in particular for being an early supporter of this blog! Thanks to ace researcher Derek Tague for reuniting the pair at last month's Friends of Old-Time Radio Convention in New Jersey and for sharing Ms. Osborne's nifty photo with all of us who love OTR.

Posted by Booksteve at 6:31 PM