I have wanted to be a writer ever since I can remember. There's a photo of me as a small child with the typewriter my parents got me for Christmas. What kind of child wants a typewriter for Christmas? A writer.
In Junior High School, I started writing fiction. I wrote hundreds of stories as well as drew hundreds of character designs for stories that went unwritten. Sometimes, I'd keep them. Sometimes I'd throw them away. Other times I'd give them to classmates who showed an interest.
I had a sword and sorcery series about a bearded king who had a magical sword grafted onto his arm where his hand used to be. I had another series about a private eye with amnesia who solved other people's cases while always trying to discover his own real identity. My favorite was SITUATION SIX, a sci-fi tale in which John Wilkes Booth turns out to be a police officer from the future tracking down the dangerous time traveling dictator...Abraham Lincoln.
None of these were particularly good, however, nor particularly original. All of them showed the profound influence of books, TV shows, movies and comics! Many of them, although given a good running start, would remain forever uncompleted, also.
This past weekend, I got together with my best friend of those years for the first time in three decades and lo and behold...he had a story of mine that I didn't remember at all! NIGHT OF HORROR is clearly inspired by our mutual love of old monster movies and FAMOUS MONSTERS magazine. My first issue of FM was the April, 1970 issue which may have been on the stands as early as January. Based on the style of my printing on these pages, I am going to date this story to 1970 making it nearly two years earlier than any of the stories in my possession. The "Stevens Publishing Company" line (me being Steven, you see) makes me think that perhaps this wasn't my first either! But for now, here it is, in all its unvarnished glory--the earliest piece of booksteve writing--NIGHT OF HORROR! 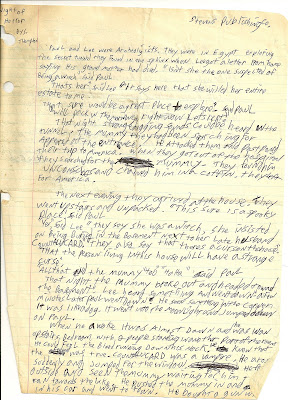 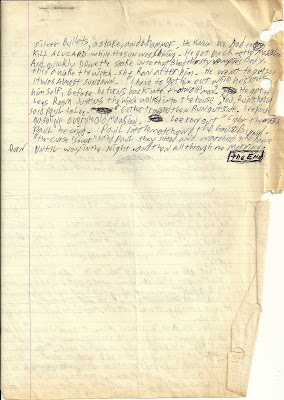 Posted by Booksteve at 6:42 AM