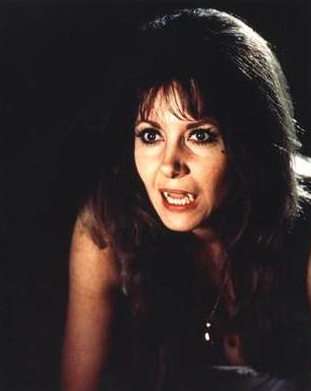 I missed THE VAMPIRE LOVERS the first time around so I didn't know what all the fuss was about regarding actress Ingrid Pitt. I did, however catch her not too long afterwards in COUNTESS DRACULA, another Hammer horror which was a dark fantasy bio of the real-life Countess Elizabeth Bathory. I was very impressed. Her performance elevated that film well beyond that of a typical Hammer gothic horror. Ingrid Pitt also appears--briefly but memorably--in my all-time favorite movie, THE WICKER MAN.
It would be well into the video years before I finally caught Ms. Pitt's smoldering performance in THE VAMPIRE LOVERS. By that point the once controversial toplessness and lesbian scenes no longer shocked so I was able to appreciate what else she brought to the table.
Along the way, I had seen her in a few other things, as well as in many interviews where she always came across as classy and irreverent at the same time. She embraced her fame for what it was and did a good job of exploiting herself rather than running from her film legacy. Fans all over the world loved her for it. Rest in Peace Ms. Pitt.
Posted by Booksteve at 1:28 PM