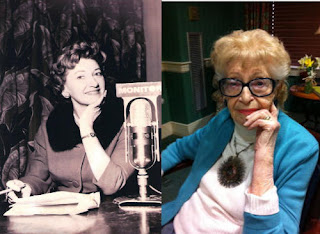 Pioneering radio and TV writer and comedic actress Peg Lynch has passed at 98. For several years, beginning in the mid-1990s, she was a fixture at the Cincinnati Old-Time Radio and Nostalgia Convention and even showed up one last time, aged 95 or so, for the final one, just a couple of years back. By that point, she was in a wheelchair and seemed a bit weak...until she got in front of a microphone. 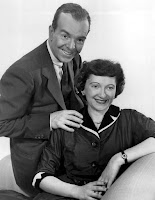 Peg had begun her signature ETHEL & ALBERT series on radio. It was similar to the better-remembered program, THE BICKERSONS, only better. In THE BICKERSONS, Don Ameche and Francis Langford often fought like a married couple on the verge of a divorce...or murder. In the case of Ethel and Albert, it was bantering more than bickering. Sometimes at his expense, sometimes at hers. There was never any doubt that the pair adored each other

Peg not only retained all her own copyrights over the years but steadfastly refused to admit that old time radio was no longer a valid medium. To that end, she kept on writing new ETHEL & ALBERT scripts and performing them in public at various events. 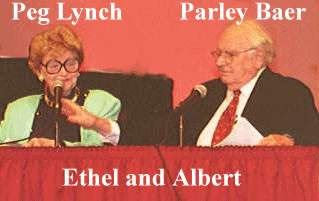 Alan Bunce was her Albert on radio and TV but was long gone by that point. In Cincinnati, Parley Baer played opposite her in her early appearances and later Bob Hastings took on the role. 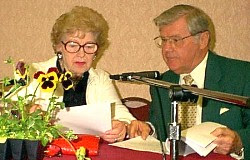 They used to auction off professionally recorded tapes of the convention shows every year and I would always try to win them since I was in some of the re-creations. As such, I also have a number of the latter-day ETHEL & ALBERT sketches.

I have to say I never found Peg Lynch to be as warm and friendly as other guests over the years but she was a thorough professional, a clever writer, a funny performer and an important, unsung person in broadcast history.

Rest in Peace.
Posted by Booksteve at 9:42 PM