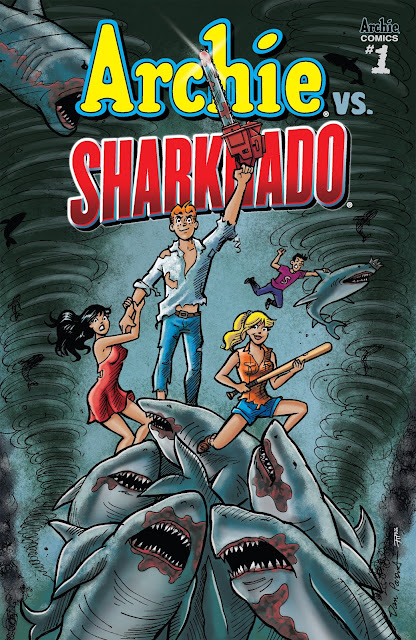 To be fair, I've never seen any of the SHARKNADO movies. I gather they're so over the top as to be of the "so bad they're good" variety...to some folks. And it's not like I haven't seen plenty of violent movies. There are several Troma flicks I quite enjoy! And as far as gory comics, I've done work on the HAUNTED HORROR comic book and its hardcover collections.

That said, John Goldwater is undoubtedly rolling over in his grave over this one. The Punisher thing worked. The GLEE and KISS tie-ins were well done. I even surprised myself by writing a good review of ARCHIE VS PREDATOR in ACE Magazine. But I can find no excuse nor justification of this one. ARCHIE VS SHARKNADO reads like nothing less than a late seventies NATIONAL LAMPOON style parody with its particularly unpleasant violence against well-loved characters. 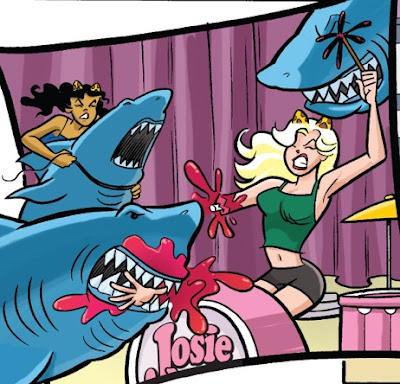 The usually wonderful Dan Parent, who has done so much of the stuff that Archie has been rightly praised for in recent years, drew it and seems to have taken great morbid delight in moments of both sex and violence such as the above.

But Archie--AFTERLIFE and PREDATOR aside--is still a comic book franchise believed by the masses to still be safe for kids and teens...and if any kids get their hands on this comic book and their parents find out, it won't be pretty.

One of the WORST single issue comic books I have ever read.
Booksteve does NOT recommend!

Posted by Booksteve at 7:24 PM