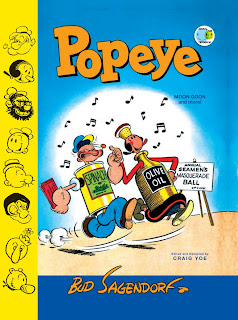 Jack Cole probably would have made  a good POPEYE artist. At least that's the assumption I'd make based on his PLASTIC MAN work. But Cole did other types of comics as well including some truly creepy horror comics before the Comics Code kicked in.

The latest volume in Yoe Books' CHILLING ARCHIVES OF HORROR COMICS from IDW collects those stories. Although his own story is ultimately tragic, Cole was one of the few artists whom I would call a near perfect fit to comic books and the tales in JACK COLE'S DEADLY HORROR will not disappoint the horror fan or the Jack Cole fan. 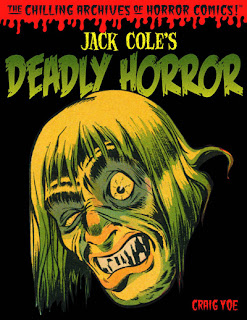 Also in today's mail was a copy of the 2nd volume collecting up the chronological reprintings of Bud Sagendorf's POPEYE comics. The strip has continued in many media since its creator Elzie Segar passed in the 1930's but Sagendorf, more than anyone else, seems the rightful successor in that his characters not only look and talk like Segar's versions but they also have the same type of well-written, wacky, creative adventures that made the original THIMBLE THEATRE a classic in the first place.

My name's in both of these so consider this more a plug than a review. But both volumes represent some of the best of what they represent. If you're a classic comics fan, here are some classic comics!
Posted by Booksteve at 4:57 PM